Virtual reality (VR) is creeping into just about every orifice of our lives, across music, gaming, sports broadcasting, and more. There’s even a dedicated accelerator for VR startups. Now, an Italian company is making moves to embed virtual reality firmly in the fitness realm, with a device designed to bring the great outdoors to indoor cycling.

Bike trainers, or “turbo trainers”, are already fairly common contraptions among cycling enthusiasts, allowing them to use their actual bike (as opposed to an exercise bike) indoors — this can be useful for winter training. Widerun, on the other hand, is a bike trainer designed to connect to VR headsets.

The company has just launched a Kickstarter campaign to raise $30,000 to help bring the device to market, and VentureBeat was able to try out a Widerun prototype in London earlier this week. 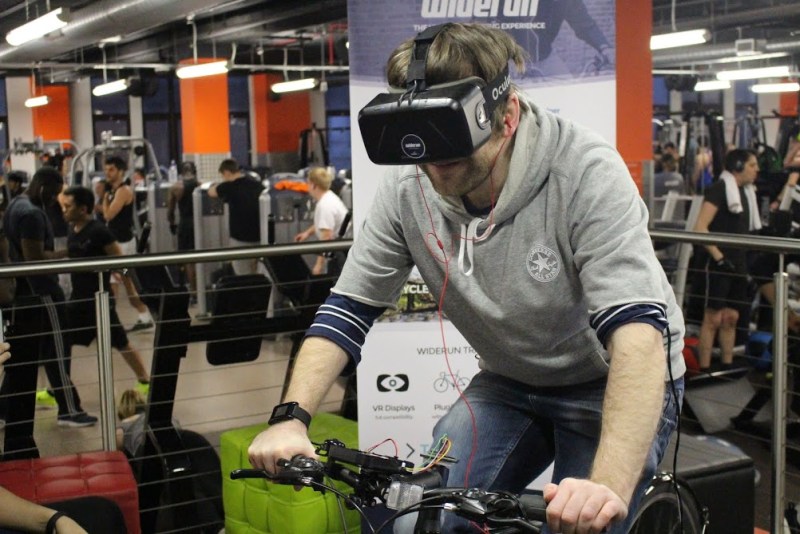 Above: Widerun on Oculus Rift

The company itself has developed a number of “virtual worlds” for use with Oculus Rift and Samsung VR, though there is nothing stopping the software and hardware (the bike trainer) working with any VR setup. For those without a VR headset, it can also be used on external screens, though this won’t be nearly as immersive. The Widerun trainer connects to the VR headset through a PC/smartphone across Bluetooth LE.

Everything on the bike works as it should while cycling in these various worlds, so when you change gears to cycle faster or slower, Widerun transmits the real-world changes caused by the rider into the virtual world.

Using a normal road bike or mountain bike, Widerun succeeds in delivering on its promise of an “immersive, biking experience,” serving up virtual 3D worlds covering various seasons and terrains. However, the much-maligned “puke problem” that has plagued virtual reality since the start continues to hamper VR’s progress.

Traversing the Alps on two wheels from my livingroom very much appeals in theory, but I found the overwhelming sense of nausea precluded me from lasting longer than about a minute — the problem stems from an ever-so-slight lag between the onscreen graphics and the user’s actual physical movements. The illness effect does of course vary from person to person, but speaking as someone who doesn’t normally get motion sickness, it perhaps is a little concerning that virtual reality can still have such an effect.

The technology is improving though, and when a consumer-ready version of something like Oculus Rift can get to a point where it is 100 percent “real-time” with absolutely zero lag, companies such as Widerun should start to garner traction.

A number of companies in the health realm are already embracing VR — last year, Runtastic revealed a new fitness app for Oculus Rift based on the 7-minute workout. And London-based Zwift is doing something similar with a primary focus on computer screens — though it is more of a game-focused approach for competing with friends. It has also built in support for Oculus Rift.

Widerun is also adopting an “open” approach including offering a software developer kit for developers, and VentureBeat is told that longer term the company plans to launch an online store where developers can sell their own virtual worlds for use with Widerun. The company ultimately wants to focus on “fun,” and it’s adapting the worlds from popular games such as Minecraft and Skyrim to be used with Widerun.

Backers on Kickstarter can reserve themselves the full Widerun trainer kit for £300 (around $450). Meanwhile, check out this demo video below for a better idea of how Widerun works.