Given the recent surge of interest in widgets from advertisers, these numbers help explain why Slide was recently able to raise $50 million at a valuation of $550 million (our coverage). If it can monetize its pageviews, it could be sitting on a gold mine.

Slide grew from 117 million monthly views last April to nearly 144 million last November while Rockyou grew from 82 million to 104 million, both largely through Facebook applications. See the two tables below for a more detailed comparison of the top widget makers between April and November. The most popular Facebook app is RockYou’s Super Wall, with more than 23 million monthly Facebook users, according to Comscore.

Widgets are snippets of code that you can embed on other sites, that allow you to do things like display YouTube videos or links to the latest posts from your blog. They also, in Comscore’s reckoning, include Facebook applications, which allow third-party developers to connect the widget with its user data, such as lists of friends.

Facebook only opened up its platform for third parties to build applications in late May, so Comscore’s November numbers include this data but its April numbers (here) don’t — which helps show you the difference Facebook applications have made.

If you’re wondering why Myspace, Clearspring and Google suddenly appear in the tables below, its because Comscore also started counting the companies’ widgets more accurately. Myspace offers widgets like Myspace Video, Clearspring offers white-label widgets for other companies (in contrast to the others) and Google offers YouTube video widgets. Comscore has been tweaking how it tracks widgets, and it still isn’t perfect. See here for more.

Note, also, that many of the smaller of the top ten companies on both lists, like BunnyHeroLabs, have popular widgets on Myspace, but haven’t focused on Facebook.

There are some issues with the Comscore data that are interesting to note.

Comscore does not currently track JavaScript widgets. That is affecting Widgetbox, in particular, as a large percentage of our widgets are JavaScript. Our internal numbers have us at 25 million unique viewers monthly.

Comscore is double counting unique viewers. In particular, Clearspring does widget tracking for Rockyou. So, one viewer is being counted by both Clearspring and by Rockyou for the same widget.

In our call with Comscore yesterday, they confirmed the double counting and are working on adding JavaScript widgets to the report. They are working with us to make sure our numbers are included accurately and expect it to be corrected in future reports.]

The context here is that more web users are joining social networks and are becoming familiar with smaller sites on the web, that serve their niche interests. They are going to these sites instead of large portals like Yahoo or MSN. In turn, widgets are a new way for content creators and advertisers to reach these users across the web. Here’s an excellent AdWeek article that goes into detail on how widgets are now of great interest to advertising companies on Madison Avenue.

Here are the top Facebook applications, worldwide, followed by the April-November worldwide comparison of widgets. (You can find US data here.) 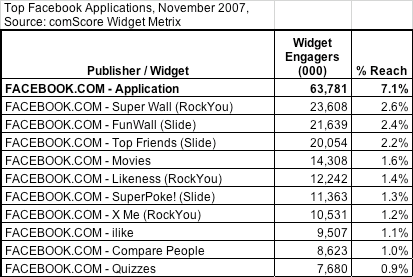 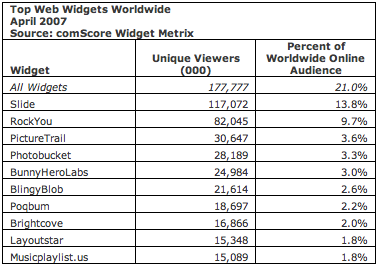 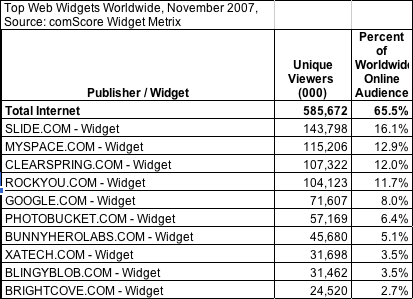