To the English-language news media, Wikipedia is a foreign country. They don’t speak the language, they don’t know how anything works, and they can’t even ask ¿Dónde está la biblioteca?

That sums up how one Wikipedia editor feels about the amount of English-language media coverage the website receives in major publications, including The New York Times.

Compared to companies such as Google and Facebook, which received a combined total of nearly 4,500 stories in the Times between January and September this year, Wikipedia racked up just 50. Twitter by itself saw 4,344 stories.

What’s surprising is that, along with the likes of Amazon, YouTube, Yahoo, Baidu, QQ, and Google India, Wikipedia sites comprise the top ten on the Internet, according to Alexa rankings.

Indeed, it does raise a valid point. Why is Wikipedia receiving so little English-language media attention when it’s undoubtedly one of the most important sites on the Internet today? 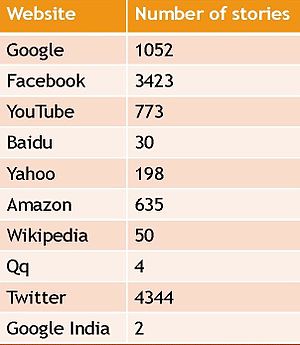 Wikipedia is not exactly been standing still, either. It recently improved its mobile app experience with new link previews for better navigation, it continues to crack down on promotional user accounts to ensure objectivity, and it is even testing full-screen ads to drive donations.

“Both qualitatively and quantitatively, news coverage is inadequate for a website and movement as large and influential as Wikipedia and Wikimedia,” administrator Robert Fernandez wrote Monday in a community blog posting that seems to reflect the movement’s frustrations.

“The news media has little understanding of the mechanics of Wikipedia, the role of the Foundation, non-Wikipedia Wikimedia projects, and other important issues involving the encyclopedia and the community. The coverage we usually see is neither in-depth, nor specialized, nor systematic,” he concluded.

While the blog posting ends with a disclaimer that the views expressed are not necessarily those of the Wikimedia Foundation or Wikipedia, it seems that they are likely not that far from the general sentiment among Wikipedians today.

The opinions expressed in the blog post are those of a volunteer English Wikipedia administrator and not those of ‘Wikipedia’ or the ‘Wikimedia Foundation’. For example, we don’t necessarily agree that member of the press don’t understand Wikipedia, or view us as foreign. We know many journalists who understand our licensing policies, or comb through our user pages and history diffs.