With Windows 10, it’s almost as if Microsoft so desperately wanted to distance itself from Windows 8 that it skipped an entire version number.

Perhaps that’s being too harsh. Microsoft likely has some legitimate reasons for leaping past Windows 9 entirely — though it failed to really make the case during Windows 10’s announcement today.

But more surprising than Windows 10’s name is the fact that so much of what’s new in the OS is meant to appease users dissatisfied with Windows 8’s touchscreen focus. Microsoft’s new product is aimed at the keyboard and mouse crew. However, it isn’t forgetting about some of the progress it made with Windows 8.

The Start Menu is back!

Since Windows 95, Microsoft has trained Windows users to head to the Start Menu button on the bottom-left of their screen. But in Windows 8, Microsoft changed the Windows experience entirely by replacing the Start Menu with the Start Screen, a full-screen launcher with Live Tiles (carried over from Windows Phone). 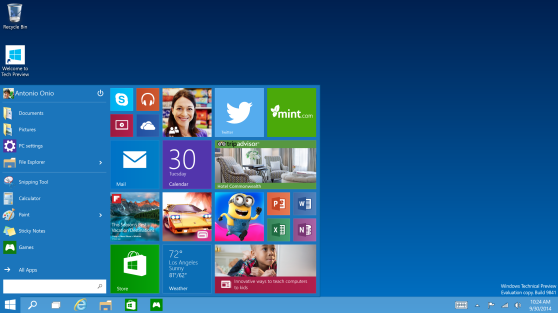 Above: The Windows 10 Start Menu

While the Start Screen was ideal for touchscreens, it was more difficult to navigate for users with keyboards and mice. You had to mouse to different corners of the screen to bring up options and to reach the Start Screen, which just felt unnecessarily complicated. Microsoft ended up adding a Start button in the Windows 8.1, but that just sent you right back to the Start Screen.

After countless user complaints, it’s not a huge surprise to see Microsoft resurrect the Start Menu in Windows 10. It’s also integrated with Live Tiles, so it looks like a weird hybrid of the Windows 8 Start Screen and the traditional Start Menu from Windows 7.

A new “Continuum” feature will also switch up the Start button functionality depending on if you’re using your computer with a tablet or with a keyboard and mouse. It’s primarily meant for devices like the Surface and Lenovo’s Yoga line, which can be used as both laptops and tablets. Once you enable tablet mode, the Start button will send you to a screen with bigger buttons, similar to the Windows 8 Start Screen. 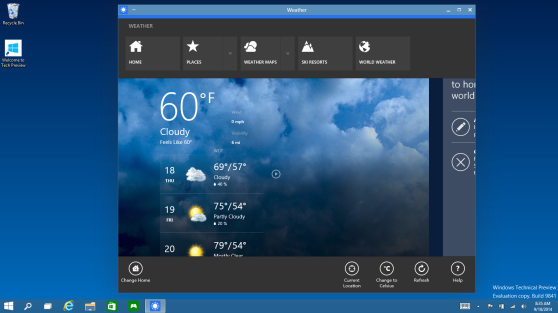 Above: A Windows 10 Metro app running in an actual window!

Oh sweet irony — Microsoft is finally getting around to putting its Windows 8 “Metro” apps in actual windows. Previously, Windows 8 apps ran in a full screen mode, or you could devote slices of your screen to those apps.

Microsoft’s approach to Windows 8 apps felt more like an attempt to recreate iOS’s fullscreen app approach, rather than evolving the interface its customers are familiar with. Microsoft also made it difficult to use Windows 8 apps alongside traditional desktop Windows apps.

With Windows 10, you’ll be able to organize those fancy new apps just like any other Windows software. They’ll have title bars, and you’re free to resize them as much as you’d like. Finally, it will make sense for keyboard and mouse users to actually run Metro apps.

Windows 10 is made for multitaskers

There was a lot of talk about “experienced” Windows users during today’s unveiling, whereas I can’t remember Microsoft ever mentioning its fans when discussing Windows 8. Several features throughout Windows 10 are entirely devoted to more hardcore users: A new “task view” will let you set up different desktops for different uses (for example, you may use a different setup at home than you do at school or work); the Start Menu’s search bar is more powerful, with integrated web searching; and even the lowly command line gets a few upgrades (you can finally copy and paste directories using the CTRL + V command!).

I know plenty of Windows users who stuck with Windows 7 because it fit their workflow best. They didn’t need the Start Screen or any of the new features in Windows 8. Windows 10 seems expressly built for them. 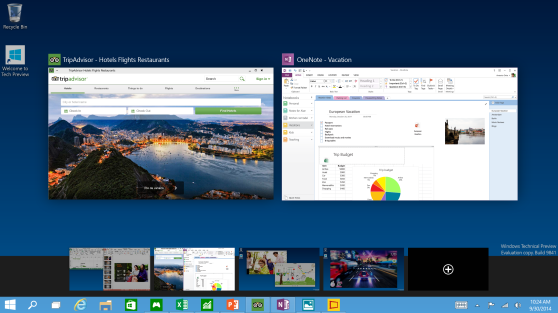 Above: Multiple desktops in Windows 10

The desktop is once again the focus of Windows

This is perhaps the biggest takeaway from what we’ve seen of Windows 10 so far: Your core environment is once again the desktop — not the Start Screen or some fullscreen app. While Windows 8 made the desktop feel like a ghetto for all those ugly, ancient, non-touchscreen Windows programs, Windows 10 seems to embrace the desktop entirely.

As someone who’s used Windows for most of my computing life, and who waited a year before upgrading to Windows 8, I’m glad Microsoft is once again embracing something familiar. I gave the company a lot of credit for the risks it took with Windows 8, but ultimately that was a release that promised more than it could deliver.

Microsoft cares what you think!

For once, Microsoft is actually listening to its fans. Tomorrow it’s kicking off the Windows Insider Program, which will give you access to a preview build of Windows 10. You’ll also be able to send feedback about your experiences. It’s not clear how Microsoft is going to manage all of this information, but it’s at the least a nice gesture for Windows users who felt let down by Windows 8.