Withings said it’s received user complaints about shortcomings in its Aura sleep device. The Aura sits by your bed, plays soft music, emits soft light, lulls you off to sleep, wakes you up, and measures how well you slept. 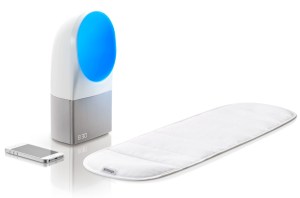 Withings CEO Cedric Hutchings sent a note to owners of the device apologizing for the many complaints his company has received about the device since its general release in August.

“We acknowledge that it was brought to the market too hastily, and that malfunctions and missing features have been a source of frustration for some of you,” Hutchings wrote. “I wish to apologize for this and would like to take this opportunity to renew our commitment to improving the Withings Aura.”

Hutchins told VentureBeat Monday that early users of the product were disappointed that there was a delay between when they got up and when they could see sleep numbers from the night before in the Withings app. They also complained that no heart rate information was included with the sleep performance results. Both of these features have now been added, Hutchins says.

Hutchings says Withings has been trying to improve the Aura through a series of updates, but that apparently hasn’t been enough to satisfy some customers. The company isn’t offering to replace the devices, but is offering to give customers a second sleep sensor (retail $129), which can be used by a spouse, free of charge, as a token of appreciation for the patience of Aura buyers.

I’ve been using the Aura for a couple of months now, and, in general, have had a good experience with it. What’s in the box: You get the device, a power cable and some adapters, a user manual, and a long flat cotton sensor device that’s supposed to fit under your mattress.

When it’s time to go to sleep, ethereal piano music emanates from the speaker, and the upright bowl fills with soft white, blue, or red light. You begin to think “This is just weird,” but a few minutes later you don’t care, because you’re already in that wonderful place between wakefulness and sleep. Here’s what it sounds like:

The music and the lights are carefully designed to signal to your brain that it’s time to sleep. Withings said sounds, light, and sequence of the sleep programs are based on scientific studies of sleep patterns.

In the morning the Aura chooses a good spot in your sleep cycle to wake you up. Then it eases in a slightly peppier version of its music. Like this:

The device can be controlled by the Withings app, which also manages other Withings devices, such as connected scales. The sensors built into the Aura allow you to give it commands by touching the top or side. To turn the alarm off, for instance, you rest your hand on top of the device.

Above: The sleep section of the Withings app.

While I had no problem controlling the Aura using the app, I found that the sensor built into the side of the device wasn’t very responsive. You’re supposed to be able to set the alarm and adjust the volume of the music by swiping up or down, but this required a lot of device fondling to work. And device fondling isn’t cool.

You can find your sleep performance numbers in the app. I found the results recorded there to be almost useless. The sensor seemed to have no idea when I was in bed and when I wasn’t. On some days it told me I had slept 23 hours. I would have remembered that. So I doubted even the feedback information that looked like it might be accurate.

On the iPhone I found it somewhat difficult to read the results, because the graph will not convert into landscape mode. I can see when I went to sleep and when I woke up, but I can’t see any time markers in between, which would be useful.

So the Aura is a work in progress, and needs some serious refinements. I can see why many users have said that the product wasn’t ready for prime time. Still, while the Aura has its flaws, it has its weird charms, too. I have to stop writing now because I’m getting sleepy, very sleeeeeeeeepy.