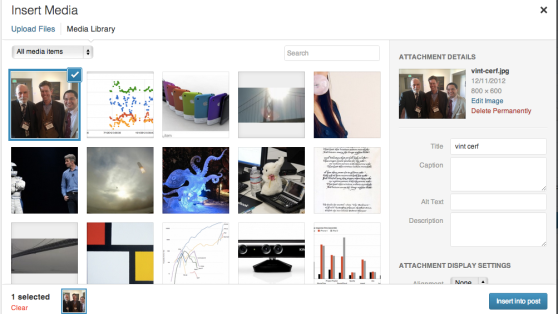 I spoke with WordPress founder Matt Mullenweg earlier today for a separate story (more on that soon), and he noted that WordPress is at its “highest levels of engagement ever.”

WordPress.com, the free blog service hosted by Mullenweg’s company Automattic, has close to 400 million monthly unique users, as measured by Quantcast, Mullenweg told me. Add in users of the open-source WordPress.org blogs, which are hosted by ISPs or by users’ own web servers, and that number nearly doubles.

In other words, blogging is far from dead, and Facebook and Twitter haven’t killed it: It may even be undergoing a bit of a renaissance.

The new media-upload dialog is a radical departure, visually speaking, from the old upload box, but the process is essentially the same if you’re uploading a single image: Just drag and drop the image onto the box, wait for it to upload, then fill out details like the image description and alt text.

If you’re creating a gallery of multiple images, however, the new interface is a wonderful improvement. It lets you browse a mini-gallery of thumbnail images (both images that you’ve uploaded with a particular post as well as other images in your media library) and simply check off the ones you want to include in the gallery.

“Media has long been a friction point and we’ve listened hard and given a lot of thought into crafting this new system,” Mullenweg noted in his blog post on the new version.

If you’ve been using a WordPress.com blog or a WordPress VIP installation, as we do here at VentureBeat, you’ve seen the new media-upload dialog for the past few weeks. With WordPress 3.5, this improvement now comes to self-hosted WordPress.org users as well. I tested it briefly on my personal blog today, and it’s a big step up.

Also in the update: A new theme, called Twenty Twelve, which offers a fully responsive design, making it suitable for smartphones and tablets as well as desktop browsers. Twenty Twelve also offers a host of easy customizations, from color to background images.

There’s also a new tool for importing Tumblr posts, and a number of developer updates. Check out the WordPress.org blog for more details.