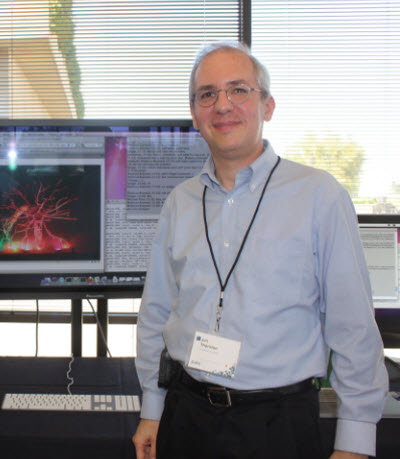 Jim Thornton, an engineer at Xerox PARC, has a plan to make the internet faster.

He calls it content-centric networking, or CCN. It’s a complex technology based on a simple idea. Right now, the internet is slow at delivering things like web video or graphics, especially when lots of people are accessing the same thing at the same time.

For something like a Victoria’s Secret fashion show, content-delivery networks such as Akamai have to plan for it way in advance. They pre-populate video caches at different points in the internet. Then when you request a video, they serve it to you from the nearest location. That helps relieve the burden of supplying video from a single site.

But Thornton believes that we can do this for every web site. Right now, the internet will connect you to a particular web location, or Internet Protocol address. It directs you straight to the end point, which could be a bottleneck if everyone wants to get there at once. Thornton’s CCN will direct you not to an IP address, but to a name. If you are looking for a Burning Man video, you can search for Burning Man. When you click on the Google search result, it will direct you to the Burning Man name, not to the IP address. And it will send you to the video that is closest to you, if there are multiple locations of that video stored on the internet. That can significantly reduce bandwidth expenses for big internet service providers. For an operator with 40 million subscribers, the savings could amount to $200 million over three years.

The research is currently under way at the Xerox Palo Alto Research Center, which plans to license it for commercial use. I met Thornton on Thursday at the 40th anniversary celebration of PARC, which invented the personal computer. Check out our video interview below.
[youtube=http://www.youtube.com/watch?v=JkgB2VFtJ2s&w=640&h=390]