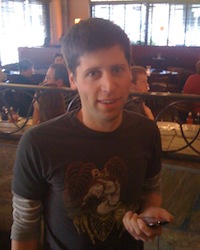 Silicon Valley incubator Y Combinator is bringing some of its most notable alumni back into the fold — as partners.

In a blog post today, partner Paul Graham announced that Loopt founder Sam Altman (pictured), Justin.tv founders Emmett Shear and Justin Kan, and Posterous founder Garry Tan are all joining as “part-time partners” who will “do the same sort of work regular YC partners do advising startups, but only 1/5 of their time.” Three of these partners (Altman, Shear, and Kan) were part of Y Combinator’s first class of startups in 2005, while Tan joined in 2008 — when the program had grown, but hadn’t quite reached its current fame.

Many incubators already have mentor programs to connect startups with experienced, active entrepreneurs , but this sounds like a way to add a little more structure (and financial incentive) to the relationship.

So how will this affect the partners’ current companies? Tan had already left his full-time role at Posterous to become designer-in-residence at the incubator. Kan and Shear still hold positions at Justin.tv (president and chief technology officer, respectively). And Altman, who is CEO at Loopt, told me this might actually be good for his location social networking company:

I’m a huge believer in YC — watching the transformation in company quality between the beginning of the cycle and demo day is amazing. I’ve been informally helping out for a long time, and I’d guess that I’ve helped about 100 YC companies in some small way. This is a more formal/more involved way of doing it. The biggest change is I’m involved in the interview process now and hold office hours on Saturday afternoons. The only effect on my role at Loopt should be a positive one–in fact, I hope that my experience at Loopt is helpful to YC cos, and certainly I’ve already had some good new ideas about things we can do better at Loopt from the startups.