Yahoo’s blog community site, MyBlogLog, has launched a new acitivity stream (a list of activity from you and your contacts on a social site) portion of its site, which it’s dubbing “New with…”. While a nice addition for users of the site, this new feature simply doesn’t compare to similar products from competitors — namely, FriendFeed.

As you’d expect, MyBlogLog lets you enter your user name for dozens of services around the Internet and then aggregates this data, along with the data from of all your contacts, in an updating list on your main profile page. Facebook’s News Feed brought the activity stream into popularity — even though it was controversial at the time. Since then, a number of services, including Plaxo and FriendFeed, have extended and improved on the idea by adding dynamic features such as commenting to these streams (our coverage).

MyBlogLog started out as an easy way for bloggers to create communities around their individual sites. Yahoo bought the service just over a year ago, but hadn’t done much with it other than integrate it with their sign-in system.

The problem with adding a feature like an activity stream well into a product’s lifespan is that it can drastically alter how that service is being used. For example, as a member of the service for nearly two and a half years, I have accumulated over 990 contacts. I added so many simply because there was no reason not to. Anyone who requested me I befriended.

Now, if I actually wanted to pull some useful information from this MyBlogLog activity stream, I would have to unfriend the vast majority of these users. There is simply way too much going on from a lot of people I don’t really know. 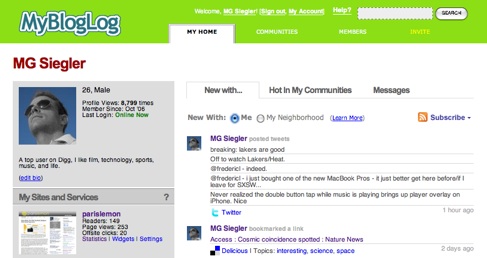 Instead, it makes more sense to keep using a service like FriendFeed that was built around the activity stream. That service, which just went public a few days ago (our coverage), has a much cleaner look and feel and is more intuitive then the offering from MyBlogLog. I already mentioned that you can comment on items on FriendFeed, but you can also do things such as ‘like’ items and selectively filter certain streams to your liking.

In fact the only real advantage MyBlogLog seems to offer over a service like FriendFeed is that it does, as of right now, allow you to link up your profiles on a lot more services.