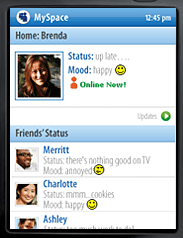 Yahoo has announced a new version of Yahoo Go, its mobile search application, as well as a new design for its mobile web homepage, and a platform for third-party developers to build widgets that run within these mobile services.

The platform is yet another effort by yet another company to try to create a mobile software platform for third parties. However, Yahoo’s new platform, which you can check out here, is more limited in scope.

Rather than being a full-fledged mobile operating system, like what Google’s Android software development kit plans to be, third-party widgets for Yahoo will only live within its mobile application and its mobile web pages.

Yahoo’s platform likely has a tough road ahead of it, as Mohr Davidow Ventures partner Sam Jadallah told the New York Times, because it doesn’t control what software comes pre-installed on handsets.

The mobile carriers decide what software comes with your phone, at least in the US. Yahoo users need to go to its mobile site in order to download its applications and choose widgets. Android presents a more interesting challenge, as it includes a full-blown mobile operating system and other handset-based features that developers can access, although it also doesn’t have the support of most major carriers, at present.

Yahoo platform will use its own XHTML programming language. It will offer a mobile web page where users can choose third-party widgets.

EBay, MTV and Myspace are among the companies that have already developed mobile widgets for it. Myspace’s widget, for example, lets its users do things like check their Myspace email, see statuses and mood updates from friends, as well as view and comment on friends’ photos. These widgets will launch later this week.

Developers will be able to run ads within their widgets in order to make money and will have the option to work with mobile advertisers besides Yahoo.

U.S. customers can download Go on more than 30 mobile devices and use it on most wireless networks. Yahoo hopes to expand Go to hundreds of devices, worldwide. Current handset manufacturing partners include LG Electronics and Motorola.