After researching some ads on Yelp, I question the claim that Yelp is delivering a highly targeted audience.

Here are examples of ads I found running on Yelp. It didn’t take me much time to find them; it’s not as if I did 10,000 searches and focused on the few that were bad.

In this first example, I searched for a car wash in Newark, Calif., and got an ad for a body shop in Mountain View (for folks unfamiliar with the area, those two cities are on opposite sides of the San Francisco Bay).

Here, I searched for Indian restaurants in San Francisco. I did get a relevant ad, but it’s not very compelling for a consumer. Should I go to a 3-star restaurant just because they’re an advertiser, or go to the 4-star ones that aren’t advertisers? (Yelp does allow advertisers to remove their rating from the ad. If you see an ad without rating, you can assume it’s a low-rated business.) 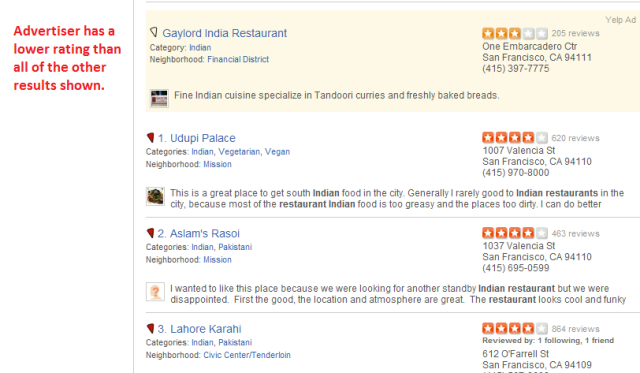 Here, the advertiser is much farther from the origin of my search in San Jose. How many people are going to drive farther when there are businesses closer and higher-rated?

Here I did a search for siding and got a contractor. But based on their details page, it doesn’t seem that they do siding. 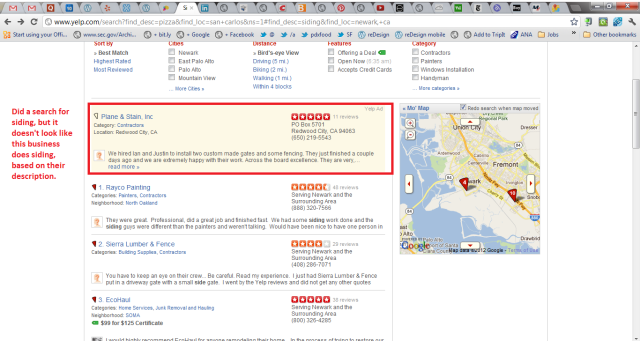 I searched for mesothelioma, which is Internet advertising gold. (It’s an asbestos-related disease.) I got an ad for a bankruptcy attorney. Those are very different problems. 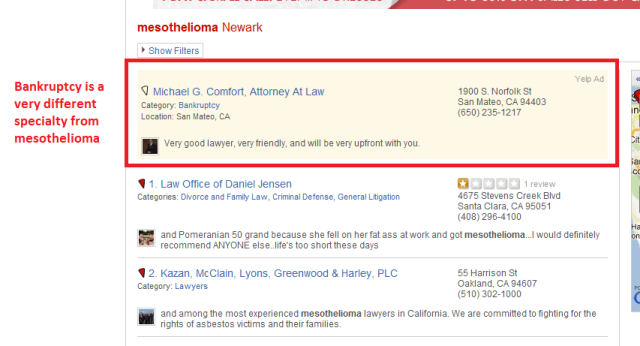 A search for Costco returned an ad for a community art gallery. 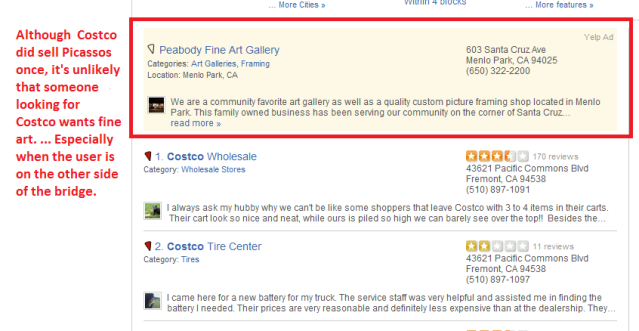 And my favorite: a search for flowers returned an ad for mattresses. 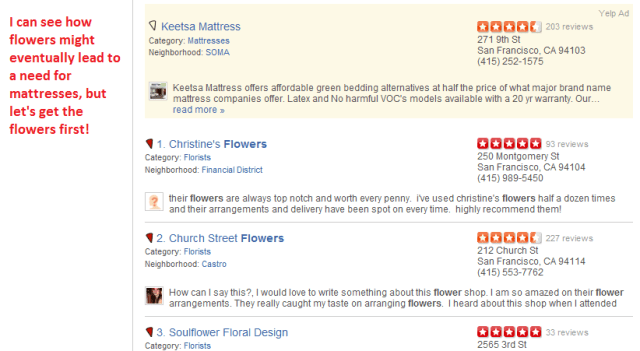 These are all terrible ad impressions. For a local business, I wouldn’t even pay a 6 cent CPM for these impressions, much less the $600 CPM that Yelp charges in certain verticals.

These ads just shouldn’t come up. Yelp did not respond to a request for comment on this story; the company is currently in the SEC-mandated quiet period before its initial public offering.

To be sure, Yelp does deliver ads that make sense. Here, I did a search for stationery in San Francisco: 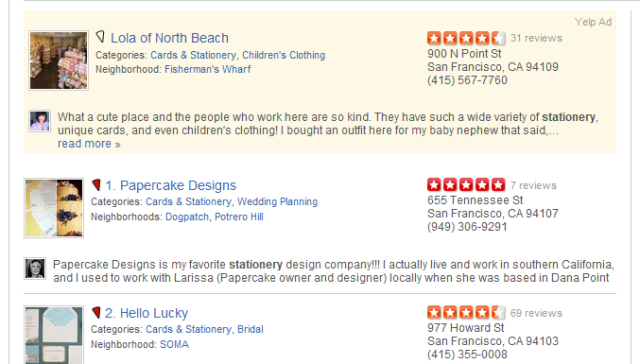 It’s a fine ad. (I wouldn’t pay $600 CPM for it, but it’s not a wasted impression.) But when I did a search for flowers, the exact same business came up. Flowers and stationery are related, but aren’t the same. I called Lola to see if they sell flowers. They don’t.

This points to two problems: a poor algorithm on Yelp’s part and the fragmented nature of the local advertising market. There just aren’t that many people searching on Yelp for services in each market. And, Yelp has committed to a number of impressions each month, so they deliver them — even when they make no sense and drive no value for the advertiser.