That word could be coming out of the mouths of small-business owners when they hear how much the online reviews site is overcharging them for advertising. At a time when much online advertising is being sold for 60 cents per thousand impressions (CPMs), Yelp is charging some local advertisers $600 per 1,000 impressions.

That’s not a typo. Yelp is charging small businesses 1,000-times the standard online CPM rates for local ads that appear on Yelp. Even when compared to its own ads for national advertisers, the company is charging a 100x premium.

This is the type of ad a national advertiser would buy: 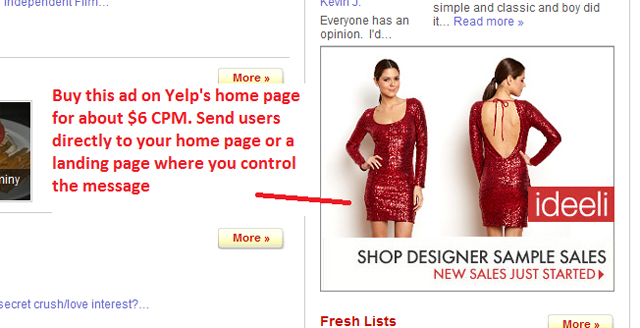 According to a source who has purchased this type of ad on Yelp, the rate is about $6 per CPM. This ad unit works like most online ads: when someone clicks on it they are taken directly to the advertiser’s site or a specialized landing page.

In this scenario, the ad goes to the advertiser’s Yelp review page. That’s a page where users are free to leave any kind of review for the business, including ones that trash it. That ad runs about a $600 CPM. Yelp is currently in its quiet period while it is preparing for its initial public offering and did not comment for this story.

According to a rate card forwarded by a business solicited by Yelp, this is what the company is charging. Note that these are general rates for Yelp, not specific CPMs for the advertisers shown:

It’s common for more targeted inventory, such as the type that Yelp provides, to command higher CPMs. But triple-digit CPMs are extremely unusual. (Yelp’s rates vary based on category and demand.)

To make matters worse, Yelp requires a 12-month commitment for these rates. (The representative offered this business higher rates for a six-month commitment. Yelp also offers 3-month agreements.) Even if Yelp doesn’t deliver your business a single customer, you’re on the hook for $3,600.

For comparison, Facebook only requires that you set your budget to $1 a day and does not have a commitment. A business could try it for a week, see if it performs and then decide.

Even as Groupon’s toughest critic, I can list scenarios in which it makes sense to run a Groupon. I cannot think of any scenarios where I would advise businesses to advertise on Yelp at these rates.

For online advertising, I strongly recommend against commitments and impression-based advertising. For a restaurant, a service like GrubHub makes more sense. You only pay if someone uses the service to order and there’s no commitment. Such services typically charge restaurants 10-20 percent of the value of orders they send.

Despite ostensibly being an Internet company, Yelp’s business model is closer to that of yellow pages companies: sell a questionable value proposition to many who don’t understand what they’re buying. While it may work in the short term, as the stocks of yellow pages companies show, it’s not a long term proposition. SuperMedia is down 92 percent since it debuted. Dex One is down 94 percent.

Combined, those companies have a valuation of $145 million. Yelp is reportly seeking to raise $100 million at a valuation of $1 billion to $2 billion. (Not that I would advise investing in SuperMedia or Dex One.)

In its latest S-1, Yelp reported strong revenue growth that earnings increased 74.5 percent year over year and 11.7 percent from the previous quarter.

But given the flaws in Yelp’s core business model, it won’t be long before investors and advertisers are leaving one-star reviews.

To see my recent discussion on Yelp’s IPO outlook with Bloomberg, check out the following video. 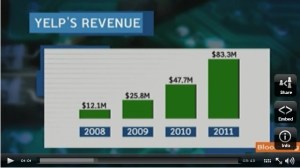