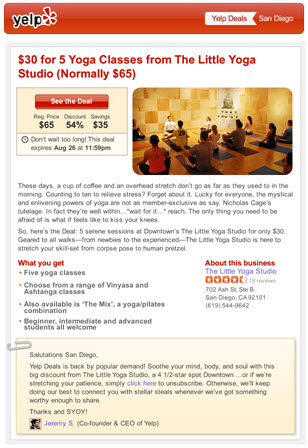 We’ve been hearing for weeks now that business-review site Yelp was working on leveraging its relationships with local businesses to offer deals to its customers, and take on sites like Groupon in the process. Today the company gave us a sneak peek at what its offering — dubbed Yelp Deals — would look like via a nifty Yoga deal for San Diego customers.

At first glance, its deal page doesn’t appear all that different from its competitors: There’s a large button to purchase the deal, a countdown to emphasize how temporary it will be, and a clear reading of how much money you’ll be saving. Where Yelp differs is in its ability to integrate reviews into the page — so now customers not only know they’re getting a great deal, but they’ll likely feel better about it too if it’s well-reviewed.

I don’t suspect that Yelp would be able to offer deals from poorly reviewed merchants, since its ratings and reviews are right on the page. That’s something that other deal sites can try to obfuscate — so Yelp may be able to promote the fact that it’s somewhat more transparent with its deals.

The company says it will soon start testing deals in San Francisco and New York.

Yelp has been in hot water recently with many business owners reporting extortion-like tactics from Yelp representatives. Yelp CEO Jeremy Stoppelman has long denied those claims, and the site eventually implemented two major changes in an effort to regain any lost user trust: It now allows users to see reviews filtered out by the site’s review filter, and it killed the “Favorite Review” feature, which was part of its advertising package.

If you consider the fact that Yelp is a trusted brand among consumers, it seems clear that its deals will be a major competitor to Groupon and its ilk. Yelp may be late to the deal site game, but it will be able to leverage its many years of consumer good will to catch up quickly.