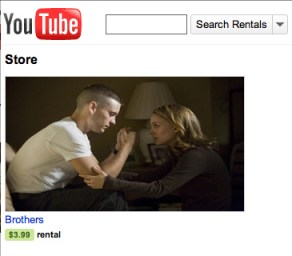 [Update: A YouTube spokesman explained to VentureBeat that their enhanced rental system has been misinterpreted in news reports. The broader rental options that a YouTube exec described last week will only be available to YouTube’s existing content partners, a range of companies that stretches from Hollywood studios to Internet upstart Demand Media. Sorry, you won’t be able to charge for your vacation videos.]

YouTube, the Google-owned video sharing site that claims to serve an average 96 videos per person to 135 million viewers each month, is building an automated system that will let its existing content partners try renting out movies to YouTube viewers, instead of serving ads with them.

The service “will give moviemakers the ability to upload and provide their streaming content for rent,” MediaPost writer Laurie Sullivan wrote after a talk with YouTube product management exec Hunter Walk. Rental movies will be available in 1080-pixel resolution, much higher than the TV and movie streams on Hulu. Walk told MediaPost that already, “people are quitting their jobs to build content for the site.”

YouTube confirmed to me that there will be two ways video uploaders will be able to make money off the uploads: An ad-supported format, or rentals that viewers will pay for through Google Checkout, a Paypal-like service. Right now, YouTube’s spokesman said, studios are still experimenting with pricing for rentals.

YouTube’s man made clear that, contary to Internet reports now being corrected by their writers, YouTube is not opening the floodgates to independent and amateur producers. Lionsgate can rent its movies. You can’t.

Letting anyone rent any video to which they own the copyright seems like the obvious end game for YouTube. That’s surely why bloggers pounced on what seemed like a plan to let anyone rent their works. As it turns out, the expanded rental services are only available to YouTube’s special partners, not to random site users.

It may not matter. Early statistics show that YouTube’s new rental store — launched last month after a January test paired with the Sundance film festival — hasn’t attracted many customers, neither for recent hits nor for indie films with buzz.

Video news blog NewTeeVee reported that a week after YouTube’s rental store opened, only a few movies had reached even a thousand rentals. Oscar winner Precious, one of the YouTube store’s top rentals, had 1,421 views. The New York Times estimated YouTube’s rental income from its recent ten-day run of five Sundance festival entries at a pathetic $10,709.16. The site served only 2,684 movie streams.

In theory, there should be a huge long-tail audience eager to pay to rent movies as long as the price is right. In practice, I wonder if YouTube would do better by accepting PayPal.