Electric scooters and Segways are both legitimate forms of transportation, but they’re just so dorky looking. A new product called the ZBoard from Intuitive Motion might save the genre, with a combination of cool technology and attractive design. Also, it just looks hella fun to ride. 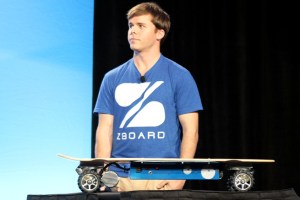 Above: Ben Forman with the ZBoard

At the DEMO Spring 2012 conference in Santa Clara, Calif. this week, the company unveiled three new 2012 special editions of the ZBoard, each costing $1,000.

“Who here likes cool new shit?,” Forman said before introducing the new ZBoards to the DEMO crowd. “This isn’t Twitter for dogs,” he added, calling the ZBoard a “sidewalk-shredding” and “Segway-smoking” transportation device.

The San Francisco-inspired board has a stronger motor to handle the big hills, and a Giants orange-and-black design. The Santa Monica special edition (pictured above) has increased range and a surfer aesthetic. Coolest of all, the Stereo Special board (pictured right) has Bluetooth-enabled speakers so you can play tunes directly from your smartphone or music player.

The original $500 ZBoard was first launched in January at the Consumer Electronics Show in Las Vegas. While not yet shipping (the first boards should be ready in May), the company is taking pre-orders and has hosted a very successful Kickstarter campaign. To date, Intuitive Motion has raised $35,000 from friends and family.

A panel of experts was completely wowed by the futuristic skateboard. Cisco’s SVP of IT communication and collaboration Sheila Jordan said she would be buying one for her son tonight but added that she’d like to see future ZBoards built with the female rider in mind. And Menlo Ventures managing partner Shervin Pishevar said the ZBoard reminded him of Back to the Future.

The Hermosa Beach, Calif.-based company is the brainchild of mechanical engineers who met at the University of Southern California. They wanted something faster than a skateboard, cooler and smaller than a bike, and able to lend a hand going up hills.

ZBoard is one of 80 companies chosen by VentureBeat to launch at the DEMO Spring 2012 event taking place this week in Silicon Valley. After we make our selections, the chosen companies pay a fee to present. Our coverage of them remains objective.