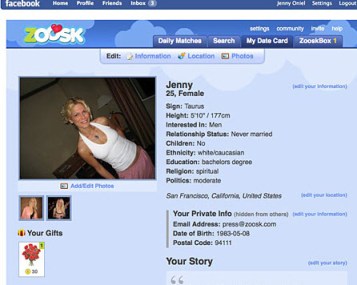 Zoosk, which boasts the world’s largest social dating community, said today it has raised $30 million in a fourth round of funding.

The round was led by new Bessemer Venture Partners. Existing investors Canaan Partners and ATA Ventures also participated. David Cowan, a partner at Bessemer, will join Zoosk’s board.

The San Francisco company said it will use the funds to expand globally, launching marketing activities in key regions, and to invest in new features and applications. Since its launch in December, 2007, Zoosk has attracted more than 40 million users from 40 countries. Of those, 12 million are active in a given month. The growth has been so rapid that Zoosk hasn’t noticed an effect from the recession.

Users can join by adding Zoosk apps on Facebook, MySpace, Bebo, hi5 and Friendster. You can also join via mobile and Zoosk.com.

To date, Zoosk, which was founded in January, 2007 by Zadeh and Alex Mehr, has raised $40.5 million. The company previously raised $6 million earlier this summer. Amidzad Partners is also an investor but did not participate in this round.

Zadeh and Mehr said in an interview that the company has grown rapidly in all geographies, but hasn’t yet overtaken the traditional web-based dating sites, Match.com and eHarmony. But they said the company’s advantage lies in modern social media and that Zoosk will continue to its push to be in every possible distribution channel. Zadeh said the round was overscribed and the valuation rose. He said the round was surprisingly easy and the hard part was picking the right VC.