When Aaron Feuer was in high school, he helped write a bill for students to give feedback on their classes.

By the time he matriculated at Yale University, Feuer had picked up computer programming skills. He couldn’t shake the feeling that the bill wasn’t enough. School districts still needed a better way to poll students and teachers and incorporate the results.

So he began building Panorama Education, which works with school districts to gather the requisite data they needed to improve education. Today, at the age of 22, Feuer closed $4 million in funding from Facebook chief executive Mark Zuckerberg’s $100 million fund, Startup: Education.

“I realized that the problem wasn’t the law,” Feuer recalled. Even as a teenager, he worked with school district chiefs and government agencies as the president of the California Association of Student Councils. “Schools needed a new product — and I decided I could build it using my coding skills,” he added.

Feuer recruited fellow Yale students David Carel and Xan Tanner. By the time they graduated, the company was making $500,000 in revenue annually, and 30 Connecticut school districts had signed on as paying clients.

Panorama sits somewhere between general-purpose survey tools, like Survey Monkey, and the large consulting companies that work with school districts on paper-based polls. These firms can charge districts nearly $1 million to get feedback from some 20,000 students, Feuer tells me.

“We used different forms of analysis that have never been tried before,” he said. Panorama is positioned as an affordable alternative — it is 20 or 30 times less expensive than contracting with a large consulting firm. 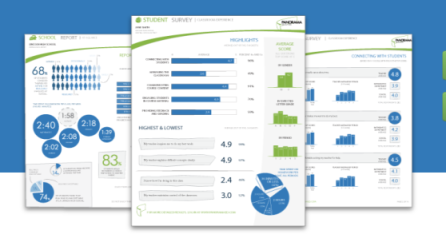 Above: Panorama was making strong revenues by the time Feuer graduated Yale.

At YCombinator, Panorama performed extensive research and user testing to determine the optimal set of questions to ask students. They also worked with translators to provide surveys in different languages, including Spanish.

Panorama results have found that certain teachers spend more time on average with male students over females, for instance. It can also reveal to a school when a department isn’t adequately catering to students with learning disabilities.

Panorama isn’t a vastly complex piece of technology by design. Feuer has found that analog, paper-based systems still work best with students, parents, and teachers. The team will work with communities to host pizza parties and other gatherings, where the surveys are handed out.

Once they’ve gathered enough polling data, Panorama has a unique algorithmic method to rapidly scan and digitize the results.

The oldest person on Panorama’s team is 26. The advantage of their youth is that the company has a strong understanding of how to reach students, especially K-12. According to Feuer, their age has not been a limiting factor. The team regularly interfaces with school district chiefs, who are both “clients and mentors,” he said.

“A key part of our success has been to approach this with humility,” he explained.

The company’s polling technology is used in more than 4,000 schools, which serve more than one million students. Its clients include the Connecticut State Department of Education, the Los Angeles Unified School District, and Aspire Public Schools.

Above: Zuck’s golden rule? Hire people you would feel comfortable socializing with!

Zuckerberg is also a mentor as well as a new investor through his fund. The team first met him at a dinner hosted by YCombinator. Zuckerberg also started his company in an Ivy League dorm room.

“Priscilla [his wife] and I are excited to support Panorama Education and its mission,” said Zuckerberg in a statement. “Their company is an exciting example of the way technology can help teachers, parents and students make their voices heard.”

Feuer told me that Zuck gave him some memorable advice on building out a strong team. The two golden rules? Only hire people you’d spend time with socially, and make sure you’d feel comfortable reporting to the person if roles were reversed.

Panorama will use the funding to hire more engineers, marketing and client services folk.

The oversubscribed seed round was co-led by Startup:Education and Jeff Clavier’s SoftTech VC, with additional participation from Google Ventures, Ashton Kutcher’s A-Grade Investments, Yale University, and others.