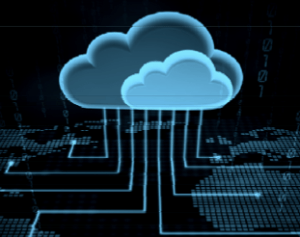 Better grab an umbrella, because it’s about to get real cloudy. A new study by Cisco estimates that global traffic generated by cloud computing services will increase a staggering 12 times by 2015 compared to cloud traffic in 2010, while data center traffic will increase at a less-showy-but-still-impressive four times by 2015.

As one of the biggest cloud computing providers in the world, Cisco has an interest in tracking and estimating how big its services and clientele could be in the next few years. The company’s Global Cloud Index, from which the eye-popping traffic numbers originate, is based on measured data center traffic, analyst projections, and academic studies.

Cisco has tracked and estimated future data center traffic for several years, but this is the first time it has looked at purely cloud-based traffic. The study confirms what many experts expect: that cloud service adoption will greatly accelerate in the next several years as more companies and consumers realize the potential of cloud solutions and storage. Global cloud traffic will increase from 130 exabytes (EBs) in 2010 to a projected 1.6 zettabytes (ZBs) in 2015, a 12-fold increase that will take the cloud to the “zettabyte era,” according to the study.

“The study was key learning for us,” Thomas Barnett, Cisco senior manger for strategic communications, told VentureBeat. “Many users don’t realize that sending a file doesn’t generate an equal amount of traffic because the file has to go through servers and such. Sending a 5-megabyte file, for example, actually generates around 50 megabytes of traffic.” 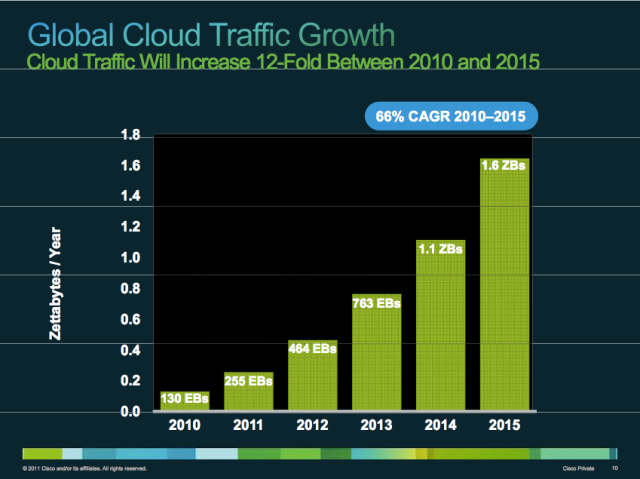 Barnett also said the study indicated the average server will go from supporting 1.4 workloads in 2010 to 2 workloads in 2014. By that year, Cisco expects more than 50 percent of all workloads will be processed in the cloud instead of in local data centers, something that would indicate an enormous shift of resources and the way IT is managed for the enterprise.

Check out the accompanying infographic for more details from the Global Cloud Index study: