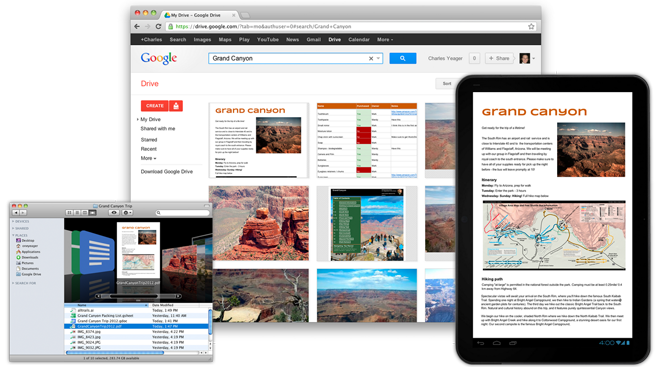 After a staggering amount of leaks, Google has finally announced its Drive cloud storage solution that will take on a crowded field of startups and major firms dedicated to solving the same problem.

Google Drive will compete against Dropbox, Box, SugarSync, Microsoft’s SkyDrive, and many other cloud storage providers. Drive’s offerings most closely resemble Dropbox, which gives users access to cloud-connected storage on PCs, Macs, smartphones, and tablets. But other players in the field will no doubt feel Google’s influence too, with Forrester infrastructure analyst Andrew Reichman telling me competitors should be seriously worried.

The company will give every Drive user 5GB of free storage. If you need more room for files, you can pay up and get 25GB for $2.49/month, 100GB for $4.99/month, or 1TB for $49.99/month. Google says that when you upgrade to a paid account, your Gmail account storage will also expand to 25GB — meaning more storage for all those huge e-mail attachments your boss likes to send.

As we noted previously, Drive will replace Google Docs. Like Google Docs, it will offer integration with other Google services. For example, you can attach photos from Drive to content in Google+, and eventually you’ll be able to attach Drive files directly to Gmail e-mails. There’s also some third-party integration with a handful of partners, such as WeVideo for collaborative video editing in the cloud, and HelloFax for cloud-based faxing and document signing.

As for access, Google is offering Drive apps on day one for PCs, Macs, and Android phones, with an app for iOS coming soon.

Create and collaborate – Google Docs is built right into Google Drive, so you can work with others in real time on documents, spreadsheets and presentations. Once you choose to share content with others, you can add and reply to comments on anything (PDF, image, video file, etc.) and receive notifications when other people comment on shared items.

Store everything safely and access it anywhere (especially while on the go) – All your stuff is just… there. You can access your stuff from anywhere—on the web, in your home, at the office, while running errands and from all of your devices. You can install Drive on your Mac or PC and can download the Drive app to your Android phone or tablet. We’re also working hard on a Drive app for your iOS devices. And regardless of platform, blind users can access Drive with a screen reader.

Search everything – Search by keyword and filter by file type, owner and more. Drive can even recognize text in scanned documents using Optical Character Recognition (OCR) technology. Let’s say you upload a scanned image of an old newspaper clipping. You can search for a word from the text of the actual article. We also use image recognition so that if you drag and drop photos from your Grand Canyon trip into Drive, you can later search for [grand canyon] and photos of its gorges should pop up. This technology is still in its early stages, and we expect it to get better over time.

Based on first impressions, Drive doesn’t appear to be anything revolutionary. What it offers can basically be done on Dropbox, Microsoft’s SkyDrive, and others. But it does, however, provide convenience to the many consumers and businesses that already use Gmail and Google Apps. If you want to share documents and files among friends and co-workers, it might just be easier to do so just using Google rather than adding another app to the mix. If you’re not already using cloud storage, this looks like the simplest option.

Gillett also highlighted Drive’s ability to scan documents for key words as its best feature — and one that will allow it to stand out, if slightly.

Check out screenshots below of the Drive service in action:

And you can watch Google Drive’s official introduction video below: