Microsoft might have dropped “Windows” from the name of its Azure public cloud, but that isn’t stopping the tech giant from making the Windows experience a bigger and bigger part of Azure.

At Microsoft’s Build conference in San Francisco today, executives unveiled the new Azure Preview portal, which includes tiles to scroll through, just like in the versions of Windows for desktops, tablets, and smartphones.

Inside the portal, Microsoft brings together billing metrics, visualizations of website usage, information on the status of cloud infrastructure, a gallery of applications to deploy on cloud resources, a lightweight text editor, and more. Admins can “pin” these tiles on the portal or scrap them, just like they can add and remove pictures on their Pinterest boards.

“This whole thing is an infinite canvas,” Karandeep Anand, who runs program management for certain parts of Azure, told VentureBeat yesterday as he demonstrated the new portal. “It can scroll pretty much as long as you want, completely in the browser.”

The new offering underlines Microsoft’s interest in unifying its services and its determination to make the cloud a first-class citizen that everyone will be friends with.

It also helps Microsoft’s positioning in the competitive, fast-paced public cloud market. Amazon might be able to announce price cuts every few weeks or months, and Google might be able to boggle minds with new pricing structures, but Microsoft has a considerable and widely used operating system, and it’s bringing components of that to the cloud now.

The new Azure Preview portal works on PCs and tablets and, given Microsoft’s interest in supporting lots of devices, it’s possible the company will find a way to make the new portal easy to access on smartphones, too. 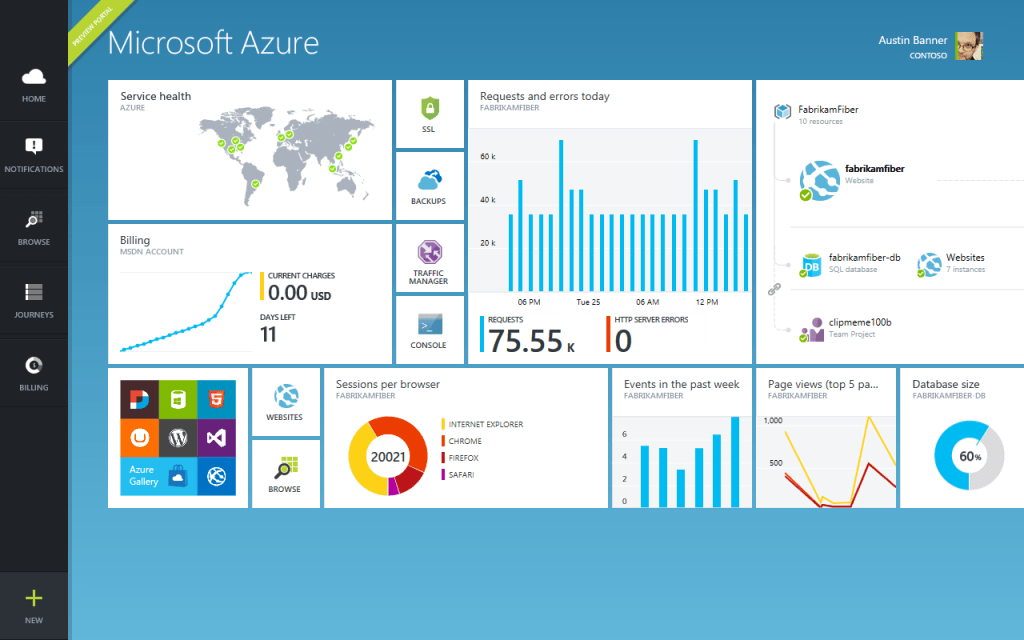 After the new portal becomes generally available for the Azure cloud, Microsoft will also release a version for companies to use when they manage their on-premises private clouds, Anand said.

Microsoft also announced new partnerships today with Puppet Labs and Chef, two major vendors of software for blending developers’ work with that of operations. Now Azure cloud users will be able to manage virtual machines — slices of physical servers in Microsoft data centers — with Puppet and Chef, Anand said. Of course, he said, those capabilities will get blended in to the new Azure portal.