Brave Software, the startup that famously raised a $35 million ICO in 30 seconds back in June, is giving away 300,000 free crypto tokens starting today in a bid to lure new users to its ad-blocking browser.

Recipients will each get about $5 worth of tokens on a first come, first served basis, the company says. The tokens can be used to reward publishers the user likes; they have no value outside of the platform itself and can’t be exchanged for other cryptocurrencies. Any tokens that aren’t used within 90 days will revert back to the company’s “User Growth Pool,” a fund of 300 million tokens set aside to grow a user base for the nascent browser.

The San Francisco-based company, which debuted in January 2016, says it currently has close to one million monthly active users.

Brave’s BAT tokens (“basic attention tokens”) are an attempt to solve the slow load times, annoyance, and invasion of privacy internet users experience on ad-serving browsers. Users get an ad-free experience on the Brave browser, and in exchange they’re expected to help compensate publishers for their content by purchasing and distributing BAT tokens to their favorite content sites and YouTube creators.

Brave has built a degree of fairness into the process: “Once a user enables Brave Payments, the Brave browser automatically and anonymously keeps track of the publisher sites each user visits. The more times that a user visits a site, the larger the proportion of the user’s monthly contribution is ‘earmarked’ for that publisher.”

By taking ads out of the web browsing experience, Brave says it speeds page load times by anywhere from 2 to 8.7 times depending on the site. It also claims to save mobile users data charges related to downloading ads. “The average mobile browser user pays as much as $23 a month in data charges to download ads and trackers — that’s $276 a year,” according to the company’s website. With Brave, users avoid those charges.

Brave also promises higher security for users by blocking the download of malware, ransomware, and spyware.

The company will distribute the promotional BAT tokens over the next 30 days or until it reaches the 300,000 token cap. To receive tokens, users must have the latest version of the browser (0.19.105). All users are eligible to receive the free tokens, including:

Recipients will receive a notification in their browser. 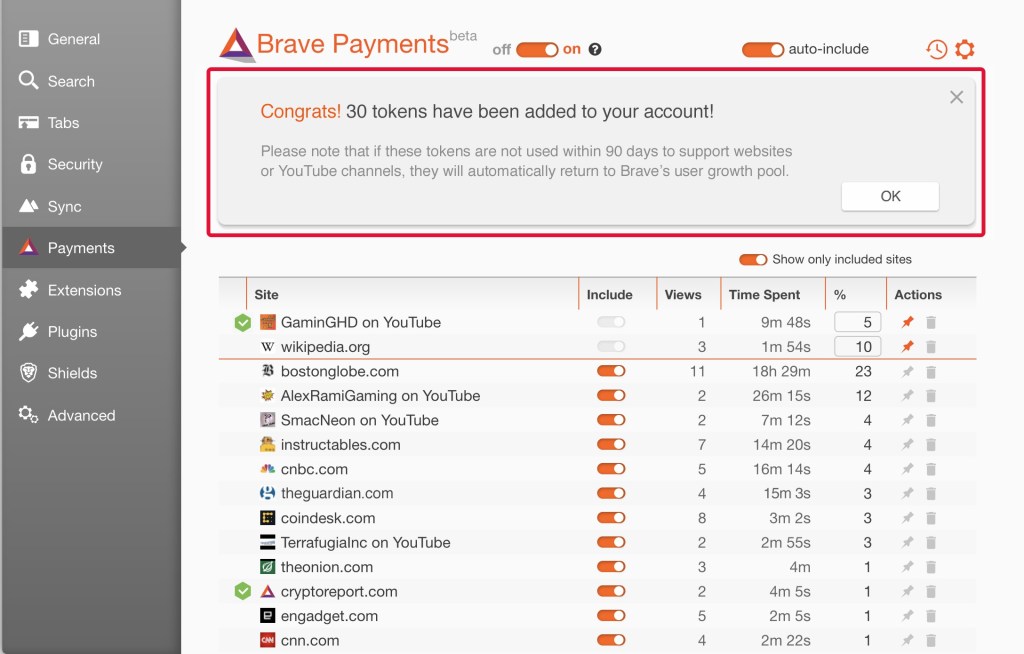 Publishers don’t need to take any upfront action to participate in Brave’s token-payment plan. The company says it will email the webmaster and registered domain owner of any content site that has accrued the equivalent of $100 in BAT tokens to help them collect their cash. When asked how much Brave has paid out to publishers to date, the company said it is not yet releasing that figure but will do so once Brave Payments has exited beta testing.

Brave got off to a rocky start with publishers but now appears to be making headway in winning them over.

“We are discussing deals with top US and UK publishers who see the problems of the Google/Facebook ‘duopoly’ as well as the inefficient, fraud-plagued ad tech ‘Lumascape,'” Brave cofounder and CEO Brendan Eich told VentureBeat. “Over 1,100 sites have verified via Brave Publishers to receive contributions, as have over 600 YouTubers since we announced support for them in November.”

However, with users able to enjoy ad-free browsing on the Brave browser regardless of whether they donate BAT to publishers, Brave may still have work ahead to make the economics of its platform viable. “We will be adding opt-in BAT ads placed anonymously in a user-private channel next year,” said Eich. Those ads “will share 70 percent of the gross revenue with users. We expect with BAT ads, many users will opt in for the automatic revenue share redistribution to their favorite creators.”

Eich was formerly CEO of Mozilla, maker of the open-source Firefox web browser.