Amazon shares finished up 2.69 percent at $1,586.51, for a market capitalization of $768 billion, underscoring Wall Street’s confidence in its relentless expansion into cloud computing, groceries and other new businesses. 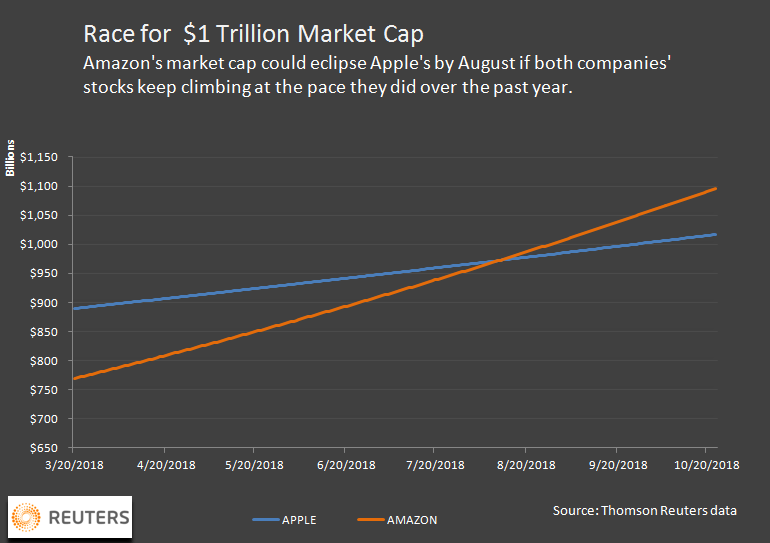 Above: Race for $1 trillion market cap

Together, Alphabet and Facebook dominate online advertising. They have previously faced government criticism for how they employ their user data.

Amazon’s stock has surged 81 percent over the past year, through Monday, bolstered by scorchingly fast revenue growth as more shopping moves online and businesses shift their computing operations to the cloud, where Amazon Web Services leads the market.

“They’re using their cash flow to develop new businesses,” said Tim Ghriskey, chief investment strategist at Inverness Counsel in New York. “They could have Apple in their sights at some point.”

Obviously, past stock gains are not a reliable predictor of future performance, and the surge in Amazon shares in recent years has been exceptional by most standards. But if Amazon’s stock were to keep growing on the trajectory seen over the past year, its market capitalization would hit $1 trillion in late August.

Apple’s market cap would reach $1 trillion around a month later if its stock price continued to rise at the 25 percent pace seen over the past year.

Alphabet’s stock has risen 4 percent so far in 2018 and is up 26 percent in the past year.

The median of analyst price targets for the three companies put Amazon’s market capitalization at $823 billion, Alphabet’s at $914 billion and Apple’s at $989 billion, according to Thomson Reuters data.