IOTA, the eighth largest blockchain in the world and one built specifically to power the internet-of-things economy, launched a data marketplace today, in partnership with over 20 large organizations around the world, including Microsoft, Bosch, Samsung, and Fujitsu.

The idea is to enable a future where any connected sensor or device can grab data from an open marketplace, for a micro-fee, to power an application. Smart city sensors, for example, could use environmental data collected via Samsung’s ARTIK sensors to drive IoT-based pollution alerts. And connected cars could perhaps tap data from Bosch, the world’s largest automotive part supplier, to get details on a part that appears to be malfunctioning. 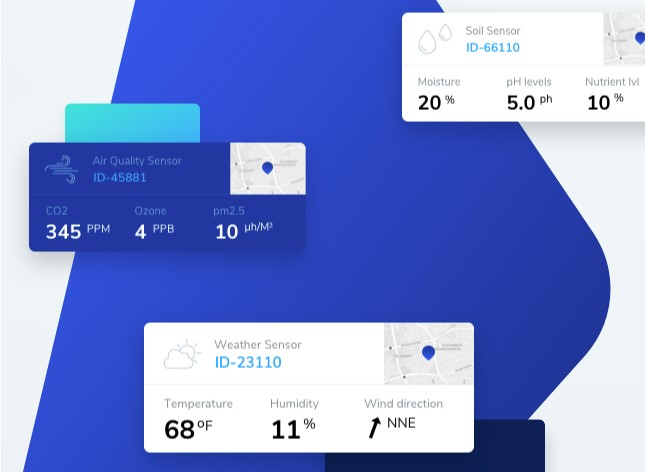 The IOTA team isn’t talking much about specific apps yet; it seems to want the IoT community to do the brainstorming there. What the team is emphasizing is that its new marketplace is a big chance to showcase how a real-time micropayment business model can enable innovative apps for supply chains, smart cities, AI, and more. “We are not only giving connected devices the ability to securely transfer, buy, and sell fine-granular and diverse datasets, we are completely breaking down today’s data silos and enable a permissionless, interoperable ecosystem that will be the backbone of our connected future,” the group said in its announcement.

IOTA is run by the Germany-based non-profit IOTA Foundation, which raised a multimillion-dollar investment from U.K.-based Outlier Ventures earlier this year and exceeded a $1.5 billion market capitalization on its first day of trading in June.

While IOTA runs on a crypto token, the MIOTA, and is largely considered a blockchain play, it’s not an actual blockchain but a variant, called a DAG (directed acyclic graph). IOTA calls its DAG the “Tangle.” The Tangle doesn’t use blocks and so, unlike the Bitcoin and Ethereum chains, it doesn’t require miners or suffer from block-size restrictions. And that makes for speedier, no-cost transactions — the kind you’d need for split-second data and resource exchanges in an IoT ecosystem. Here’s a quick primer on Tangle vs. blockchain:

While the value of the IOTA token has seen a significant rise over the last few weeks based on the technology’s promise (and perhaps some price pumping), it’s been this high before — back in August. The team is currently running centralized servers to support the ecosystem during its “infancy stage” and concerns remain that the system could fail once those centralized resources are eventually shut down, which they would have to be to fulfill IOTA’s promise of a decentralized network.

IOTA’s vision of connecting every IoT sensor and device for real-time transactions also depends on every piece of connected hardware being upgraded with a specialized component — a “curl hasher” — that would allow it to support IOTA. The curl hasher would enable even small devices to do their own hashing “for hundreds/thousands of transactions per second locally,” which would enable IOTA to scale enormously, according to the company’s blog. But is it realistic for the group to expact widespread rollout of the necessary component across many varieties of hardware? IOTA insists it is. Others have doubts.

Beyond the partnering companies mentioned above, other partners in the new test data marketplace include Cisco, Orange, Daimler, Accenture, Deustche Telekom, EWE, Tine, PwC, Schneider Electric, DNV GL, and others. And IOTA has said it continues to be open to new partnerships. The partnering companies “have deployed sensors that directly sell the data on the marketplace. The data ranges from environmental data from various locations all around the globe, to anonymized health care data from wearables, to agriculture data from Africa,” according to the announcement.

“This [marketplace] will act as a catalyst for a whole new paradigm of research, artificial intelligence, and democratization of data,” said IOTA cofounder David Sønstebø.

When asked specifically about the pricing, cofounder Dominik Schiener wouldn’t provide specifics but told VentureBeat, “Right now you can purchase access to data streams (i.e., subscriptions) on the website. In December we will integrate the ability to purchase individual data packets and we will also open up an API, so people can build applications with it. We will be deploying several dozen more sensors over the next few weeks and will also try to get some more unique ones.”

“The possibilities of applications based on blockchain and especially Tangle (“next generation blockchain”) are immense,” said Dr. Rolf Werner, head of Fujitsu’s Central Europe division. “Providing public access to valuable data is one of the most pressing challenges within IoT. The Data Marketplace of the IOTA Foundation is one of the most innovative initiatives in this area. As one of the world’s largest IT companies, Fujitsu is strongly supportive by developing blockchain and Tangle-based offerings and actively integrating them as scalable solutions into the ecosystems of our customers.”

The IOTA ecosystem is itself still in beta testing, and the new marketplace is a pilot at this stage. The team hopes it will be a model for an IoT-based market in which machines will actively trade data and compute power to enable all kinds of new capabilities.