Patreon, a subscription and donation platform that lets YouTubers and other creators earn money for their online content, has announced a major deviation in its monetization model.

Up until now, Patreon took a set 5 percent cut from all processed payments, while there are additional processing and payout fees. Moving forward, Patreon will offer three creator plans with a range of features and prices. Wary of blowback, however, Patreon is quick to stress that these changes won’t impact existing creators, which is why they will be kept on their current pricing and payment processing rates.

At any rate, Patreon Lite has basic features including a hosted creator’s page and communication tools, while fees are set at 5 percent for each payment received plus processing fees. The Pro plan will charge 8 percent on all income, though as noted existing users will be kept at their current 5 percent rate — additional features here include unlimited app integrations (none are available on Lite), analytics, and priority customer support, among other add-ons.

Then there is Premium, which will charge 12 percent for new Patreon users, with existing Patreon creators charged at 9 percent if they elect to upgrade from their default Pro plan. Premium also comes with some brand new offerings such as Team Accounts, which allows multiple people to access the same account — this will probably be more useful for small media companies or creative studios. 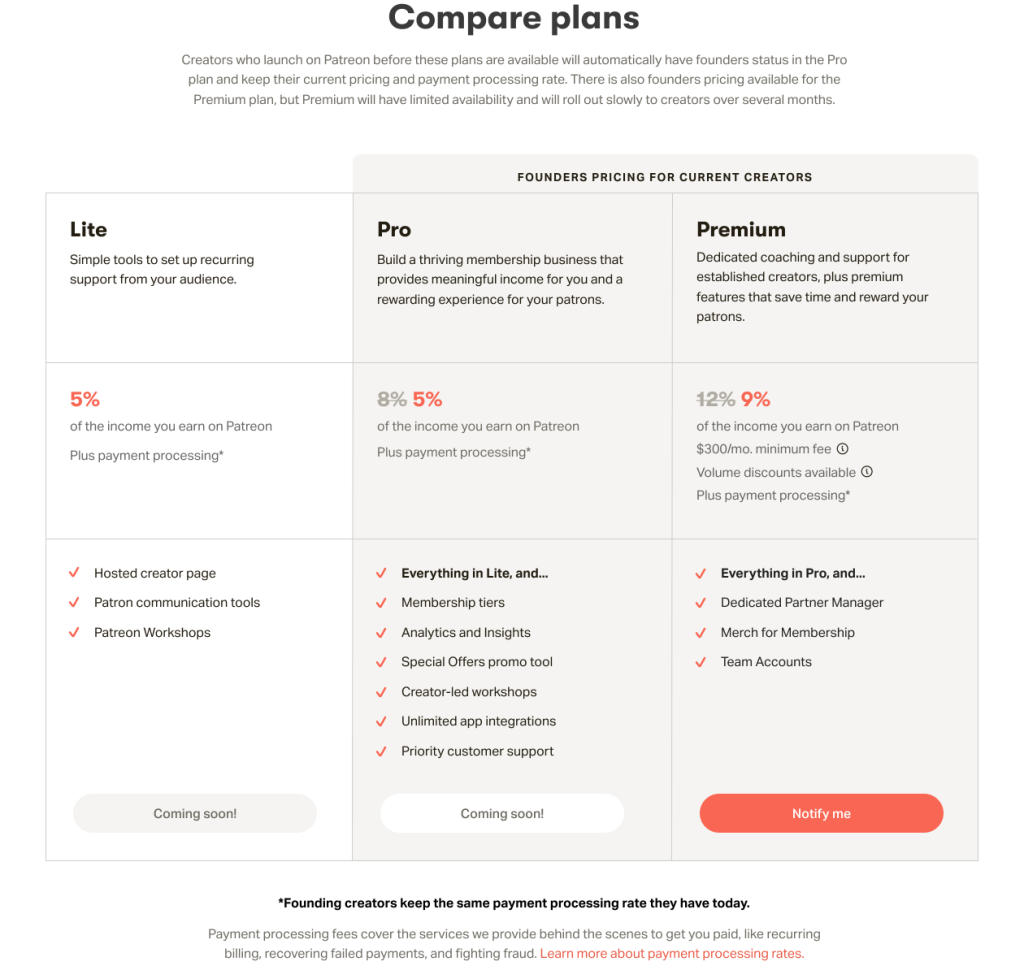 It’s also worth noting here that Patreon is tweaking its payment processing fee structure. As things stand, the actual amount of payment fees varies based on a number of factors, though Patreon estimates that on average it is effectively around 5 percent.

From early May onwards, pledges of $3 or less will attract a set “micropayment rate” of 5 percent plus 10 cents for each payment. All pledges over $3 will use what Patreon refers to as the “industry-standard” rate of 2.9 percent plus 30 cents, which is what payment processing companies such as Stripe charge. Those paying with PayPal from outside the U.S. will be charged an extra one percent.

Again, these new fees apply to future creators only.

Patreon was cofounded by YouTube musician Jack Conte, who was seeking an easy way to allow his fans to contribute money for his online videos. He later brought in his former college roommate Sam Yam, who now serves as Patreon’s CTO, with the duo going on to launch Patreon in 2013.

The San Francisco-based company has raised north of $100 million since its inception, and is now the default mechanism for millions of people to pay their favorite online creators. Earlier this year, Patreon revealed that it now has 3 million patrons actively paying money each month, and it is on schedule to hit $1 billion in total payments sometime in 2019.

Patreon is clearly super wary of upsetting the apple cart with these latest changes, which is why it has been careful to keep current users on their existing plans. But as a result of these changes, it said that it will now be able to invest heavily in its platform, which is the biggest hint it could give that these new creator plans are designed with one goal in mind: to bring Patreon more money.