Smartphone manufacturers are going all-out to maximize screen real estate without compromising on features. And it’s against that backdrop that Samsung today unveiled the Galaxy A80, which sports a gargantuan 6.7-inch display and a camera that slides and rotates up from the rear.

Over the past couple of years, mobile phone makers have tried a variety of methods to grow their screens without increasing the size of the device itself. One of these ways has been to eat into the top bezel with a notch — Apple’s iPhone X in 2017 wasn’t the first to include the bezel cutout, but it certainly kick-started a craze, with many Android devices following suit.

The notch allows companies to increase their screen-to-body ratio while retaining the selfie camera, but it comes with trade-offs such as reduced access to alerts in the notification bar and, well, questionable aesthetics. The notch has proved unpopular with many people, and this has led to alternative solutions such as in-screen selfie cameras that reduce the notch to more of a punch-hole, while sliders have resurfaced alongside pop-up cameras that go some way toward concealing the front-facing camera.

The Samsung Galaxy A80 has another solution for some of these aforementioned trade-offs.

The full-screen display shows no signs of a selfie camera — until you slide a rear panel upward, which reveals the front-shooter. 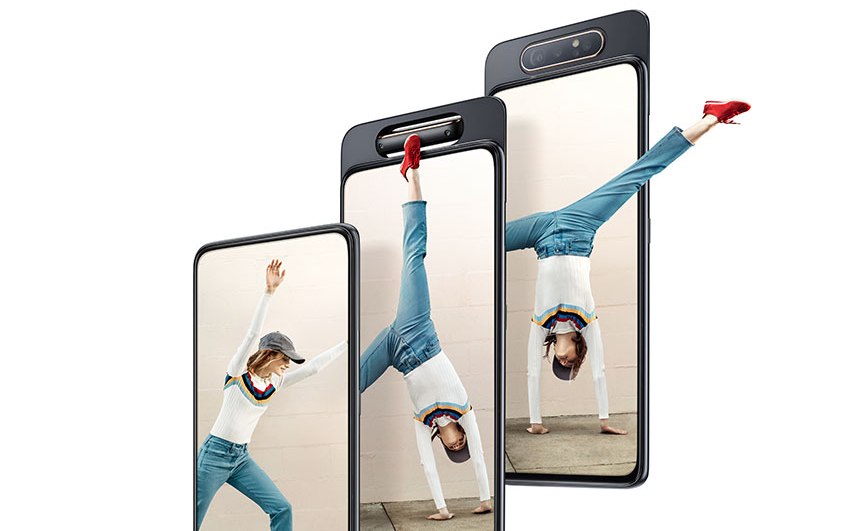 Above: Samsung Galaxy A80

Now, this is where the really novel aspect of the Galaxy A80 kicks in. The front-facing camera actually doubles as the rear-facing camera — it swivels around to face the front when the slider is activated.

The upshot of this is that the rear- and front-facing cameras are exactly the same quality, featuring a 48-megapixel main lens, an 8-megapixel ultra-wide lens, and a 3D depth lens.

It’s worth noting here that Samsung isn’t the first company to bring a rotating mobile phone camera like this to market — Oppo, for example, released its N1 device back in 2013 with a similar rotating camera.

However, as the world’s biggest mobile phone maker, Samsung is in a good position to make the promise of triple-lens, high-quality smartphone photography a reality — for selfies and everything in between.

Other specs worth highlighting include the on-board 8GB of RAM, 128GB of internal storage, a 3,700mAh battery, 25-watt supercharging, and an in-screen fingerprint reader. There is no 3.5mm headphone jack on the Galaxy A80, which will undoubtedly upset many, but this seems to be the direction Samsung is heading — the recently announced Galaxy Fold has no headphone port either, while the upcoming Galaxy Note 10 is also rumored to be ditching the jack.

The electronics giant hasn’t revealed a price as of yet, but it did provide a launch date of May 29.