Today Facebook pulled the wrapping off its partnership with Uber to bring the transportation service to Messenger. Starting today, select users will be able to order a car through Uber inside of Messenger.

Facebook said the feature is still in testing and will only roll out to some users in the United States. However, if you’re one of the lucky early testers, your first ride using the service will be free (as long as your tab is under $20).

In this update to Messenger, the “more” button — designated by an ellipsis icon — will include a transportation feature. Where once the more button offered a list of GIF makers, stickers, apps, and filters, as well as a way to send a current location, it will now have three categories: transportation, GIFs, and location. 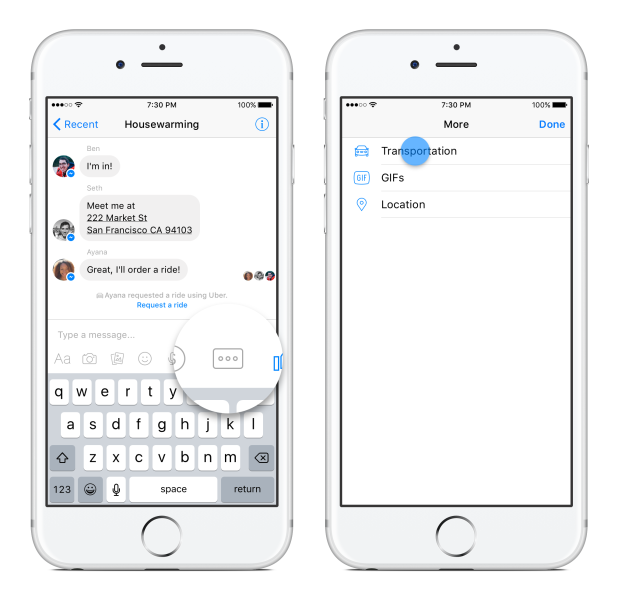 Clicking on an address or the “Request a ride” suggestion inside of Messenger takes you to a new screen where you can order a car, set a destination, and see your driver en route. 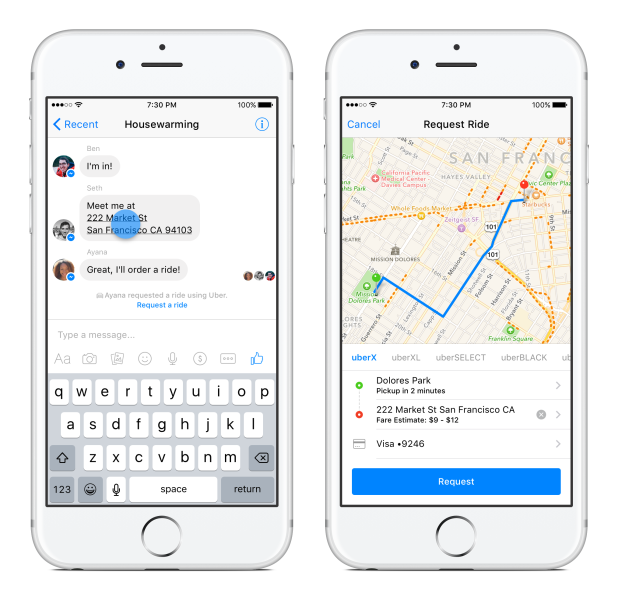 Facebook will also enable Uber to communicate updates to riders directly through Messenger, leveraging the customer service chat windows it first unveiled at the F8 conference earlier this year. 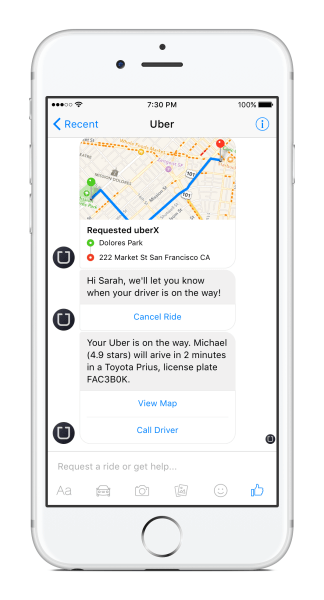 The partnership with Uber is the first real manifestation of Facebook’s goal to be a sort of WeChat of the west. The Chinese messaging app WeChat pioneered much of the in-app commerce that Facebook hopes to enable down the road. In 2014, WeChat was already facilitating some 21 million rides through its partnership with car-hailing service Didi Kuaidi, according to TechinAsia.

To bring Uber inside of Messenger, Facebook is leaning on its partnership with payment processor Braintree. That may seem like a small, boring detail, but it’s anything but. Braintree, which is owned by PayPal, works with a wide variety of hot services like Hotel Tonight, TaskRabbit, Minibar, and mattress startup Casper.

If Facebook and Braintree were to extend their relationship further, we’d likely see a blossoming of on-demand services inside Messenger — for instance, being able to book an Airbnb or order home goods from Jet.com while inside the chat app.

Though it’s hard to say whether people in the U.S. will want to place orders from a messaging app, it’s becoming increasingly apparent that Americans like shopping on their phones. Over the holiday season so far, an increasing number of online consumers shopped from their mobile devices. Even Walmart noted that 70 percent of traffic to Walmart.com was coming from mobile. Much of the rapid growth of mobile commerce may be due to easy solutions like PayPal One Touch, Apple Pay, and now Android Pay, which allow consumers to enter their payment information once for a wide spectrum of retailers and services. The mobile shopping experience is shaping up to be a more fluid experience than ecommerce ever was, to great effect.

This confluence of technological advancement and consumer expectation is exactly what Braintree, Uber, and Facebook are betting will get people to make purchases in unlikely places.

“There will be a lot of purchases happening outside of the traditional merchant checkout,” said PayPal global head of product and engineering Bill Ready, “and we are a key enabler of those kinds of those experiences.”