Database startup SingleStore today announced that it raised $80 million in a series F funding tranche led by Insight Partners, bringing its total raised to over $319 million at a post-money valuation “just shy” of $1 billion. Khosla Ventures, Dell Capital, Rev IV, Glynn Capital, and Google Ventures also participated in the round, which CEO Raj Verma says will be put toward product development and improving awareness of SingleStore’s managed database service offering.

The adoption of big data and AI is fueling the demand for scalable database solutions. According to a Statista survey, 48.5% of respondents at enterprise organizations said that their employers were driving innovation with data in 2021. Cloud deployments of databases look increasingly attractive to companies transitioning to digital platforms, with Gartner predicting that 75% of all databases will be migrated to a cloud service by 2022. 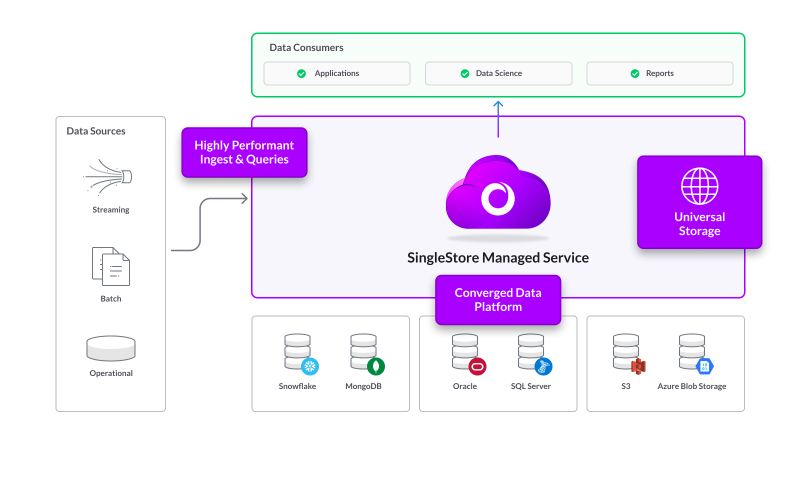 SingleStore intends to capitalize on the trend. Founded in July 2019 as MemSQL, the platform offers a transactional system for operational data that leverages relational algebra with simple, declarative statements. Several years ago, SingleStore rebranded as it evolved beyond in-memory and switched to a tiered storage approach with a mix of cloud and hardware technologies.

“Today, we are a cloud company,” Verma, who joined SingleStore as co-CEO in July 2019 alongside cofounders Nikita Shamgunov and Adam Prout, told VentureBeat via email. “SingleStore is a single database for all data-intensive applications in a hybrid, multicloud environment. [We offer] a unified database to handle both transactional and analytical workloads with separation of storage and compute and system of record capabilities. SingleStore runs fast analytical queries across large, constantly changing datasets with consistently high performance.”

SingleStore claims that its database platform can process a trillion rows per second, up to 1,000 times faster than some rivals. The company separates storage and compute in an operational and analytic cloud database, enabling customers to ingest billions of rows of data an hour and host databases with more than 60,000 tables.

Verma says that “multiple” customers are running more than 10 SingleStore databases and that a few large companies, like GE, have replaced multiple databases with SingleStore. “[We simplify] the support of diverse workloads by reducing operational complexity with the ability to support  data-intensive applications with a single database,” he added.

Beating back competitors like Oracle, Snowflake, and MongoDB, Verma says that last year was the “best ever” in the company’s history and that 2021 is outpacing 2020 year-over-year. SingleStore notched a 300% uptick in new business acquisition, growing the startup’s customer base to include Uber, Comcast, Goldman Sachs, Hulu, Cisco, and others in financial services, software and software-as-a-service, media and communications, and energy industries.

SingleStore expects to reach 300 employees by the end of the year, up from 170 this time last year and 275 today. The company recently opened an innovation center in Raleigh, North Carolina and plans to continue expanding in the coming months.