Ever since Nest Labs first started selling its learning thermostat in 2011, consumers have responded to its simplicity and the fact that it just works. It wasn’t the first thermostat on the market, but likely helped accelerate the move toward more connected homes. Today, the company has several announcements aimed at promoting this space and improving its Works with Nest program.

Developers can also now build on top of the Nest Cam, thanks to the open availability of a new Camera API. Additionally, there’s now a Works with Nest store that features a catalog of all the third-party integrations with Nest’s line of products.

More than 11,000 developers have accessed Nest’s API in order to tie their smart products in with its offerings. Much of this is spurred by customer demand, as people increasingly reach for “intelligent” appliances and tools.

“People just want homes to be better,” Greg Hu, Nest platform senior manager, told VentureBeat. “We believe that people don’t walk into a store to look for a connected home hub. All of these things work on their own, and now they can work together. It all starts with great products.”

Until now, everything Nest has been doing has centered around cloud-to-cloud integrations, but has relied on Wi-Fi for communication. Nest Weave offers an enhanced protocol that uses not only Wi-Fi, but also Thread, to offer better reliability, security, low latency, and more.

You might be thinking that Nest Weave is exactly the same as something Google announced this year at its I/O developer conference. However, the company told us that Nest Weave is a proprietary application protocol that Nest has used within its own products and is now offering to developers. It worked with Google on its version, which has the broader goal of impacting the larger Internet of Things space.

One selling point of Nest Weave is the money it can save. Hu said that although there are plenty of connected objects, such as lightbulbs, televisions, and locks, the fact that they’re using Wi-Fi can make them costly to use. With Weave, those costs should be reduced.

By not using Wi-Fi, Weave is improving latency as well. The company told us that devices can talk directly with an end-to-end latency of less than 100 milliseconds, much faster than through standard Internet connections. 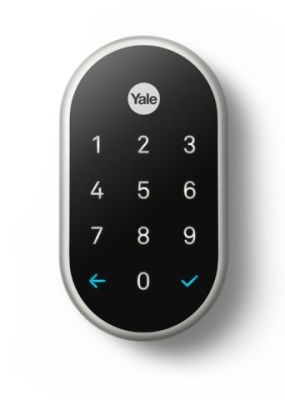 An example of Nest Weave in action can be seen with Yale’s new Linus lock. This connected residential door lock lets you check to see if the door is open or closed, set up passcodes to provide different levels of access, and more — all through the Nest app. Using Weave, the lock communicates with any Nest product in the home without relying on Wi-Fi. If a burglar severed the Internet connection, the Linus lock would still remain functional, collecting up to 10 days of history and utilizing a magnetometer to ensure that the door is fully closed.

Security device manufacturer Tyco is one of Nest Weave’s launch partners and is using the technology to make its window sensors more connected. As Hu explained to us, these sensors can’t work on Wi-Fi and needed another way to connect with the home. This is where Weave is supposed to shine — better network redundancy to ensure that there’s not as many vulnerabilities and devices function as intended.

To help with development, Nest has partnered with Dialog, Freescale, Qualcomm Technologies, and Silicon Labs to provide kits to help developers get up and running quickly. The goal is to make sure that Nest integration is top of mind at every point in the development process — from creation to launch — and by teaming with chip manufacturers, Nest wants to get in early.

Nest also offers integration with its core app, meaning that if developers don’t have the capabilities to create their own mobile app, they can piggyback off of Nest’s.

“Building a connected product is hard,” said Nest vice president of engineering, Matt Rogers. “We’ve been doing it for the past five years and have first-hand experience with the challenges. That’s why we want to make it easier for developers… [They] have an end-to-end solution when they work with Nest, and can use only the parts of the program that meet their needs.”

Nest Weave, along with the Nest app integration, will be available to developers in 2016. Nest is not charging developers to use this protocol.

Building around the Nest Cam with a new API 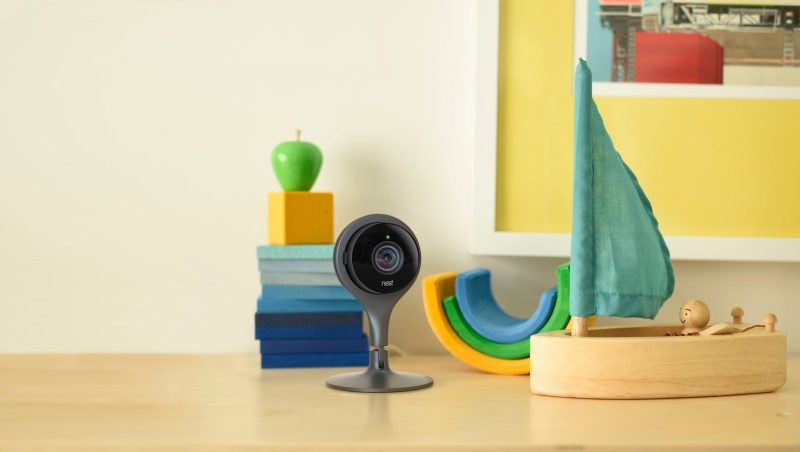 More than a year ago, Nest made a deal for $555 million to acquire connected camera company Dropcam. The two entities eventually merged, culminating in the launch of a rebranded device called the Nest Cam earlier this year. Now the company is giving developers access to the camera through a new Camera API, something that wasn’t available until today.

Aubrey Thelen, Nest’s head of developer relations, told us that things like basic camera control, motion and sound events, and extracting clips from the camera are all possibile through the API. At launch, August, Philips Hue, Mimo, Skybell, and Petnet are the first developers to have access.

As examples of integrations, the Nest Cam can do things like send you a snapshot of anyone who tries to access your August smart lock, or, if you’ve left your house without turning off the lights, detect the illumination and automatically take care of it.

Interested developers can visit Nest’s developer site where they’ll receive access to all the technical documents and the API — a standard REST API that requires little overhead. There are no costs or fees associated with using it and call limits are based on the customer experience.

Access to the API is open now to all developers. All integrations with the aforementioned launch partners will be available later this month.

Find your integrations at the Works with Nest store

Until now, we’ve been talking about making it possible for third-party devices to connect with Nest products as part of the company’s Works with Nest program. And while there have been many launch partners and different integrations, there hasn’t been a central place to find verified partners, until now.

With the Works with Nest store, accessible both online and in the Nest app, certified products are showcased to help customers realize just how large the connected home ecosystem is. “It’s about discovery and helping the customer find out what else works with their home,” Hu told us.

All developers listed in the store have been certified by Nest’s developer program, and the store gives smaller developers the chance to get their product out there.

Nest says its store won’t be available for customers until later this year, but developers interested in having their products appear can go to its site for more information.

Even with the debut of Amazon Echo, ivee Voice, and a slew of other hubs all trying to capitalize on the smart home trend, Nest remains undeterred. “Developers understand that Nest is completely focused on the home, almost more than any company,” Hu told us. “We started bringing technology to the home and remain dedicated to bringing this day in and day out.”

Hu said Nest probably won’t set up a hub, adding: “We don’t believe that customers want a hub. They don’t want to have to pair everything against it. They just want it to work. They want to be in control of the integration, but they don’t want to configure it. It’s not [something that’s] customer friendly.”

Every one of Nest’s products are hubs in and of themselves, and the company is hoping developers will be able to use them as a base from which to build more intelligent things.