Have mercy: It looks like C# is staging a comeback.

CodeEval has named its top coding languages for 2014, and we see a couple of interesting surprises. Year-over-year, C# was the second-fastest growing language. And Internet powerhouse PHP was the biggest loser, down 55 percent from 2012. 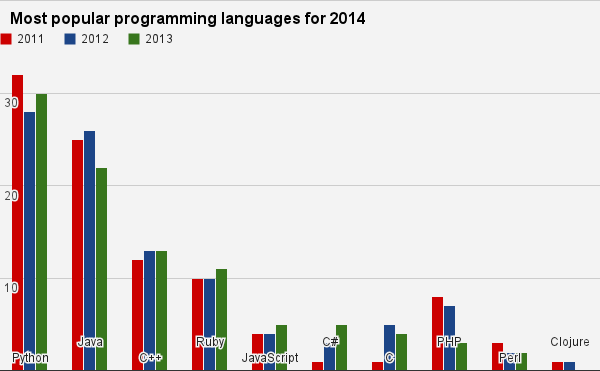 By volume, Python and Java reigned supreme. But Java, as you can see, is something of an ailing giant despite the popularity of Android with consumers.

When you look at percentage change from 2011 to the present, iOS coding language Objective-C is still going strong. But check out C#! This Microsoft technology is still small in sheer volume, but it’s growing quickly: 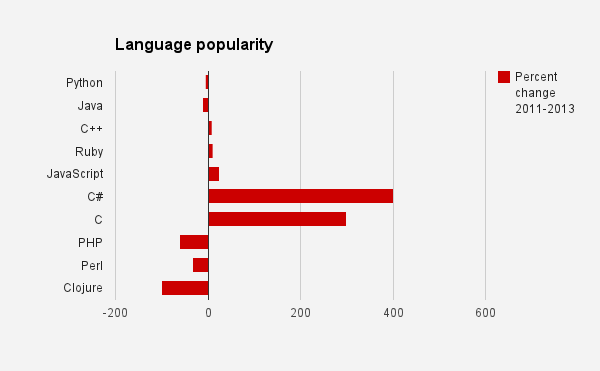 Some of us were less surprised than others. Take Gregg Pollack from Code School.

“C# is the language of the Microsoft developer. There have been lots of improvements to the language over the past 10 years, so this isn’t that surprising,” he told VentureBeat via email.

He also had some thoughts on Java’s decline:

Interpreted languages like Python and Ruby have better language design and thus are more pleasant to program with. This fuels the open source community around the languages, which encourages cutting edge developers (and thus, startups) to adopt them. The bigger corporations slowly follow.
In my experience many Java developers have moved to these interpreted languages.

CodeEval gathered this data “based on thousands of data points we’ve collected by processing over 100,000+ coding tests and challenges by over 2,000+ employers,” according to the company blog.

The company enables devs to show off, particularly to potential clients and/or employers, by completing coding challenges created (or merely chosen from a library) by employers. Devs are rewarded with cash and prized for their efforts.