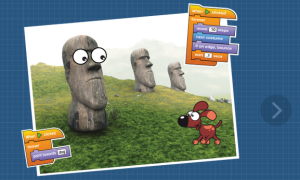 While startups like Treehouse and Codecademy are bringing simple coding lessons to teens and adults, a new service launched today to help younger children learn how to code.

The company is Tynker. Its core philosophy is that elementary school-aged children should understand the basics of how computers work and how they’re programmed.

“We don’t think of programming skills as having the ability to write Ruby or Python with proper syntax,” the team wrote in a recent blog post.

“Rather, we believe that knowing how to program means having a basic understanding of a language’s underlying computational logic. Seen from this perspective, programming is one of the most valued skills in the 21st century. In which case, no age is too early to learn programming.”

The Tynker Learning Platform, which uses its own visual programming language, is focused on bringing better STEM education tools into classrooms and is hence geared toward teachers rather than lay individuals or parents (although we can imagine homeschooling families taking huge advantage of this opportunity).

Here’s a sneak peek at the interface:

All its tools are free to use; they include lesson plans, interactive tutorials, project management software for assigning and grading projects, and advanced lesson-creating tools.

And unlike adult programming classes, the tasks in Tynker’s lessons will have kids working on kid-appropriate, actually fun projects — stuff like creating cartoons, building mobile games, and building robots.

The startup launched today with a sizable ~$3 million in seed funding from 500 Startups, NEA, Felicis Ventures, and a slew of other angels and institutions, the team confirmed via email. Stay tuned for our in-depth interview with Tynker co-founder Krishna Vedati.