One of the stranger-looking representatives of the electric car revolution is approaching its public debut. The Aptera 2e, an all-electric car that the company calls an “aerodynamic marvel,” has reached pre-production and is scheduled to start being manufactured in October of this year.

Aptera’s real claim to fame, aside from building electric vehicles in the first place, is its three-wheeled design that places two wheels at the front of the car and one in the back. This arrangement confers some steering and efficiency advantages, but is unknown in modern cars, which has prompted some (including me) to suggest that Aptera will have difficulty breaking into the market.

But Aptera has two things today that it didn’t have when it started: The backing of Google.org, and 4,000 deposits on the 2e. Aptera’s original design, the 1e, was supposed to launch at the end of last year, but most new car manufacturers to date have had trouble delivering on time.

Deposits are not guaranteed sales, of course. Placing a deposit on the 2e requires only $500, but Aptera has yet to put a firm price on the vehicle, giving instead the rather wide range of $25,000 to $45,000. It’s reasonable to assume that if the price is closer to the higher end of that spectrum, many of those orders will get canceled.

There’s also the recession to worry about. But as Tesla Motors has shown, there’s still strong interest in the high-end market in electric cars, so initial production runs will likely sell out quickly. The real question is what will happen in the months and years after the initial hype has died down.

Aptera has also offered a few updated specs for the vehicle: Zero to 60 acceleration in under 10 seconds, a top speed of 90 mph, and a  top range of over 100 miles. More pictures after the jump.

Update: Since this article was posted, Aptera has released some specs for the vehicle, which were printed in the Aptera forum. 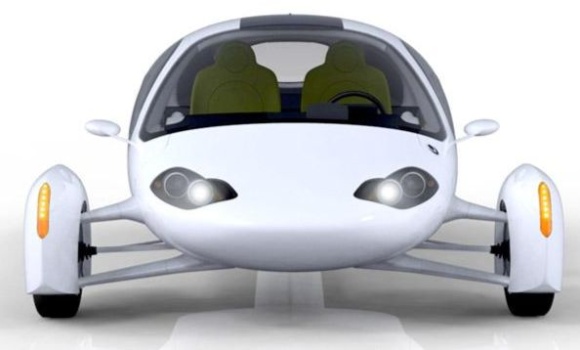