The Detroit Auto Show is underway, and the world’s most famous vehicle brands are touting the next generation of cars. And although yesterday’s fervent promises of hydrogen-powered vehicles have mostly fallen away, they’ve been replaced with new promises, this time centered around the idea of the electric car.

Don’t believe the hype. Although electric vehicles are almost certainly the way forward, much of the motion is really a show intended to sway the opinion of consumers and legislators in the short term. Startups hope to build an early niche, and America’s big auto makers are hoping their fervent hand-waving will bring accolades and government money — but in the near term, we’ll see little motion in the industry.

Why, you may ask, when all the technology needed for electric cars already exists, and hybrids like the Toyota Prius have already been a sales success? If you’ve been paying attention for the past year, you should know the answer. For everyone else, here’s a flashback to the distant year of 2008, which was intended to start the electric vehicle Renaissance.

If not for all the effort Tesla Motors and, to a lesser extent, Norway’s Think, put into marketing themselves, their failures last year might not have resounded quite to much. Yet Tesla went to great lengths to brand itself the savior of the green car revolution and found itself feted by press and public alike. It also won approval for a big auto-manufacturing plant in San Jose, Calif.

At first, with the exception of a bad transmission and some nasty company infighting, it looked like the plan might succeed. Then the recession sank its teeth in. October saw chairman Elon Musk step in as CEO and start layoffs. From there the bad news kept rolling on: First came reports that Musk had the company on artificial life support in lieu of real funding, then late in the year, he admitted to the SF Chronicle that the San Jose plant, along with the Model S sedan, might not get off the ground. Now, rather than going mass-market, it looks like Tesla will be going even more high-end.

For those in the know, Think was a close second to Tesla. Fortune’s Todd Woody has followed the company most closely — from its promising beginnings to its mid-December layoffs and consideration of a sale. And an end to Think would obviously spell an end to Think North America, a Kleiner Perkins and RockPort Capital funded subsidiary.

Some environmentalists attempted to hide their smug satisfaction when oil prices shot up, putting a serious strain on the country’s many SUV and truck owners. Others shouted their scorn to the sky. Indeed, one could hardly help feeling that a sort of heavenly economic vengeance had fallen upon the arrogant, wasteful owners of large vehicles.

You won’t hear much from those environmentalists now, aside from some angry mutters and reproachful tongue-clicking. One of the year’s last stories showed that as oil prices fell from their mid-year highs, buyers veered back to their beloved SUVs and away from fuel efficient vehicles. (Note to those buyers: No, owning a Ford Explorer Hybrid does not make you cool.)

You can pick up a set of lead acid cells for a few bucks — but, as the saying goes, you get what you pay for. Lithium-ion is the only battery technology suitable for pure electric cars
today, and although variants are being commercialized, they’re usually lithium-based. The price points announced this year for vehicles using lithium-ions, and the sad performance specs of the ones that don’t, help to illustrate the bind we’re in.

The bottom line is that all the best batteries use expensive ingredients that aren’t getting cheaper, and widespread use might even drive their price up, offsetting better manufacturing techniques. Of course, new battery variants are under development, but read on.

Lithium-ion batteries may be common today, but it’s easy to forget that they were first introduced in the 1990s and took a decade to start showing up in stores. What fewer people know is that they were first conceived of in the 1970s. By contrast, the internet has grown from almost nothing to its current state in about a decade.

Exciting news about battery technology appears regularly. But the unfortunate reality is that research into new, more effective (and economic) batteries is a materials science that takes a very long time to perfect. Investment will help, but money can’t create technology. Some might point to an alternative: Ultracapacitors. Again, read on.

To be fair to quiet Lubbock, Texas-based EEStor, the company hasn’t made many public claims. Then again, the company hasn’t gone out of its way to dispel the rumors and claims others made about its technology. One of those was partner Zenn Motors, which promised shareholders that EEStor ultracapacitors would be headed for Zenn electric cars in late 2007.

That claim didn’t pan out, but the two companies suggested that mid-2008 would see prototypes delivered. Come Christmas Time, the ultra-secret energy storage devices were still nowhere to be seen.

Ultracapacitors are especially relevant to the above discussion on batteries, as it’s hoped the former will improve the efficiency and economics of the latter. Unfortunately, most companies in the field have yet to provide hard evidence that they can achieve much of anything. 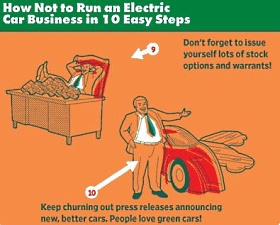 One of the longest-operating electric car companies around is Zap, the creator of one of the first electric scooters and currently a seller of low-speed electric vehicles. The company claims to be nearing completion of a high-tech, highway-speed car called the Zap X. (Update: In the comments below, a Zap employee says the X was shelved in favor of the Alias, which is listed on the company’s website as having a late 2009 delivery date.) But in March, a Wired exposé outed the company as a borderline-fraudulent operation with no ability to deliver.

The counter-argument is that some Zap vehicles are on the road today, proving that the company can produce a real product. The company appears to be building a factory in Kentucky. And chairman Gary Starr has been on a personal campaign to call reporters (including yours truly) and refute the Wired article. Still, it seems a bit unlikely that Wired’s fact checkers waved through a seven-page list of fabrications.

Rumors intermittently popping up on the Internet throughout the year perpetuated a story of a solar-panel equipped Toyota Prius. Excited comments suggested that the solar panels would help fuel the car. Later, even more excited commenters suggest that the panels would provide the entire fuel needs of the car. Unfortunately, this is just the sort of idiocy that ultimately leads to disappointment.

The reality is that a car plated with theoretically possible 50 percent efficient solar panels — an outlay that could cost more than the car itself, if such panels even existed — might provide enough power for 30 or 40 miles of driving, given a full day of charging in the desert (or similarly sunny area). But I wouldn’t try driving it through Death Valley without a wall-socket charge first (or a spare battery).

As for whether a future Prius model will come with solar, that part is true. But the reality just ain’t exciting: The low-power system will only power the ventilation system, not even the air conditioning, as some had hoped.

One of the year’s biggest electric car stories has been the impending arrival of the Chevy Volt, a plug-in hybrid intended to run solely off its electric charge for the average commuter. But late last month, General Motors announced that it would delay construction of the factory meant to produce the Volt’s engine.

GM says that the halt will not delay the Volt’s release in 2010. Then again, given the potential public outcry (and the auto bailout at risk), can you imagine them saying otherwise? 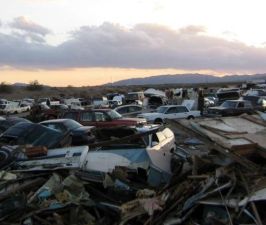 In the beginning of 2008, I wrote an article listing every electric car company I could find. Reviewing that list today is rather instructive. Several companies, like American Electric Vehicle and Spark EV, no longer exist. New models promised in 2008 by other companies have yet to appear, including Phoenix Motorcars’ sport utility truck and the Aptera Typ-1.

Give ’em some credit: There’s a recession on, and having some problems delivering (or surviving) is entirely understandable. But this recession might last for a long time.

It’s not all doom and gloom. There have been several shining lights for the electric car world. Chief among them is Better Place, the electric car charging network that has now announced projects on three continents, including ours. There’s encouraging news from the hybrid market, with Toyota making more and better Prius models, and others like the Ford Fusion and Honda Insight appearing. GM is opening a new battery plant, Tesla confirmed a supply deal, and Kleiner Perkins’ John Doerr is promising a battery breakthrough.

But at best, it looks like commercializing and selling large numbers of electric vehicles will be a slow and challenging process. Consumers have proved fickle in their interest; a number of ventures will fail. And there are definitely no magic solutions to leap from hybrid to full electric vehicles.