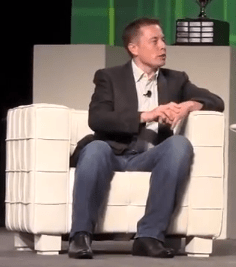 Tesla Motors chief executive Elon Musk was the final keynote speaker at the TechCrunch Disrupt 2011 conference in San Francisco this week. He’s a longtime entrepreneur and one of the co-founders of PayPal, along with Max Levchin and Peter Thiel.

Musk told entrepreneurs at the conference to start smaller companies with lower capital costs instead of jumping straight into a large market (watch the video below). The ante for a car company, for example, is around $1 billion, said Ray Lane, a partner at Kleiner Perkins Caufield & Byers. Musk was able to enter that market thanks to the success of his first company PayPal, which was bought by eBay in 2002.

Thanks to the success the three co-founders of PayPal achieved, they were dubbed members of the “PayPal Mafia.” Thiel went on to become an investor while Max Levchin started Slide, which was later bought by Google. Musk started Tesla Motors, an electric car company, and SpaceX, a space transportation company.

Tesla Motors has since gone public and SpaceX is currently slated to replace the now-ended U.S. space shuttle program. It will start with simple cargo missions, but SpaceX flights will begin carrying astronauts in around three years, Musk said.