The nearly five million commercial and industrial facilities in the United States account for nearly half of all domestic energy consumption, at a cost of over $200 billion each year. But according to Chris Pacitti, general partner at venture capital firm Austin Ventures, only five percent of that market has adopted sophisticated energy management tools. Investors are taking notice.

Software-based cleantech like energy management software (EMS) is a fast-growing segment as interest in hardware-based cleantech wanes. Leading EMS vendors like C3 and Hara offer tools that allow organizations to measure their energy consumption and, often, identify operational inefficiencies. That can lead to savings in energy consumption as well as real dollars, a fact that’s attracting some business owners’ attention.

A Pike Research report estimates the EMS and services industry will grow to $5.5 billion by 2020, from just under $1 billion in 2011. That’s a compound annual growth rate of more than 20 percent. 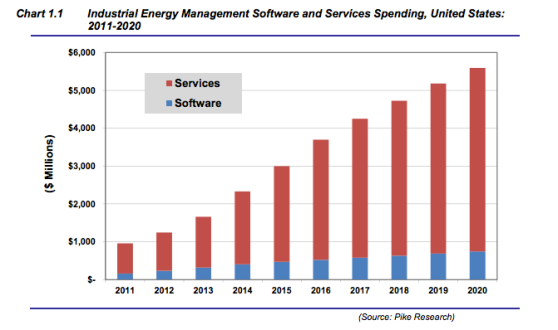 An example of a recently-funded EMS vendor is Noesis, backed by Austin Ventures and Black Coral Capital. The company’s Web-based tools track energy consumption across more than 640 million square feet in nearly 7,500 buildings. Noesis’ facility portfolio has grown by 200 percent in the past four months.

Additionally, Groen says that hardware-based cleantech has received something of a “black eye” as companies like Solyndra have come to light, giving investors more confidence in funding EMS-based cleantech.

“These applications empower and incentivize both utilities and end customers to get more from their energy,” says Steve Vassallo, general partner at Foundation Capital. “Initial investments in cleantech were focused on the infrastructure, but the time has now come for the next wave of digital energy solutions and applications, of which energy management and technology-enabled conservation will play a substantial role.”

William Jaffray, an energy engineer at Associated Renewable, points out that many businesses are taking a hard look at their energy use for the first time. This stems from the desire to reduce consumption, lower energy costs, and address White House calls-to-action like the Green Button Initiative. “Good management software provides useful analysis of energy consumption and costs,” Jaffray says.

Juan Lois, financial analyst at Associated Renewable, adds, “The key to the accelerated growth of the industry is the fact that businesses and large corporations now have access to much more detailed and precise energy consumption reports. This allows them to reduce the variability of consumption–especially during peak demand times–reducing energy costs, maximizing efficiency, lowering operating costs, and increasing the value of the property.”

Vassallo is bullish on the long-term revenue potential for Software-as-a-Service (SaaS) EMS vendors, particularly from utilities customers. “While utilities historically tilted toward capital-intensive enterprise software sales, the benefits of SaaS-based approaches are simply too good to ignore,” he says. “Utilities will absolutely gravitate toward Cloud-based, managed services.”

Tom Pincince, president and chief executive of Digital Lumens, believes the most promising long-term revenue models include solutions and services delivering continuous and ongoing operational efficiency. He says that “Simple reporting and monitoring will not deliver enough value; winners will be systems that drive changes in the way a building and its occupants use energy. Ultimately we’ll see new business models such as Light as a Service or HVAC as a Service.”

Economic and legislative forces are driving numerous changes within the energy management landscape. With the re-election of President Obama, there will likely be a continued emphasis on climate change, sustainability and energy independence. This gives investors a long-term opportunity for funding a market that will inevitably be expanding for quite some time.

Ashley M. Halligan is a 2007 graduate of Marietta College (Ohio) with a bachelors in journalism. She has a background in freelance feature writing–in particular, travel, musician and human interest features. She is a market analyst at Software Advice, where she regularly reports on sustainability news and trends along with trends in the nonprofit sector. Connect with her on Google+ or follow her Contemporary Pilgrim book project.