Whether the frenzy of initial coin offerings that swept the globe last year was a temporary phenomenon or the start of a lasting revolution, the bottom line is that the bottom line was huge.

A new report from the Crypto Valley Association and consulting firm PwC Strategy& notes that through the end of November, there were 430 ICOs worldwide, up from 2 in 2013. Those ICOs raised a collective $4.6 billion.

When the final numbers are tallied to include December, the total is likely to be significantly higher. October and November alone included five of the largest offerings ever, to the tune of $494 million. 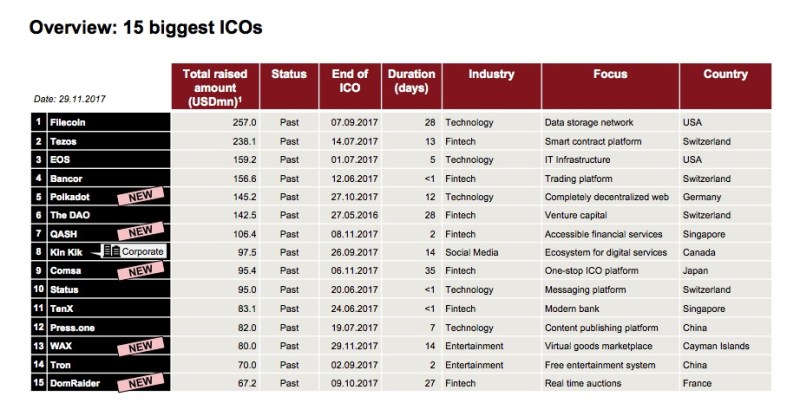 The report highlights a few interesting trends. First, many of these ICOs involve U.S. entrepreneurs who are going overseas because of regulatory uncertainty at home. While ICOs are disrupting traditional venture capital, they also bestow large sums of money on companies that haven’t been heavily scrutinized by third parties, beyond the usual release of a white paper.

For the moment, Switzerland and Singapore stand out as leading hubs for ICOs, though there is a worldwide rush by governments eager to study the trend, so new regulations could change that landscape.

The Crypto Valley Association is based in Zug, Switzerland, which has adopted “Crypto Valley” as its moniker in a bid to become a center for blockchain companies.