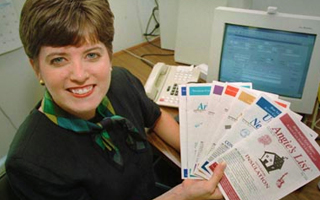 So far, the stock price has risen 25.08 percent in trading during its first day on the public market.

The stock (ticker symbol ANGI) has seen a few ups and downs so far on the NASDAQ, but it’s still trading above the initial price. The company’s initial public offering raised $130 million for the company.

The closing price values Angie’s List at $801.7 million — not bad for a company that got its start with its founder going door-to-door.

The company, which runs a site for finding and reviewing contractors and service providers, “should be pleased with its opening day performance,” said Dun & Bradstreet tech specialist Lee Simmons in a conversation with VentureBeat today.

“Its pop is certainly similar to the opening day boosts that Groupon and LinkedIn saw, where shares rocketed before settling back down above their opening.”

Groupon itself started with a share price of $20 and closed the day of its IPO at $26 per share, down from a $30 peak.

Angie’s List strikes Simmons as a better long-term bet than many other recent tech IPOs.

“Angie’s List has real revenue with a real user base,” Simmons points out. “The question will be whether it can sustain itself as an advertising-dependent company, particularly in an economy that’s not quite out of the woods… As it can keep overhead costs down, I believe it has a good shot at long-term sustainability.”

“By that, I mean that they seem to be a more intrinsic part of users’ everyday experience. Angie’s List by and large is a company that requires an opt-in by the user. You have to go there to get the experience, whereas Groupon delivers the experience directly to you inbox each morning.”

Simmons noted that Angie’s List is also quite a bit older than either LinkedIn or Groupon. The company was founded by Angie Hicks in 1995. Hicks originally went door-to-door to collect contractor reviews.

“Consumer reviews may not be as sexy as e-coupons for laser hair removal, so I suppose the buzz factor may be limited in that context as well,” Simmons concluded.