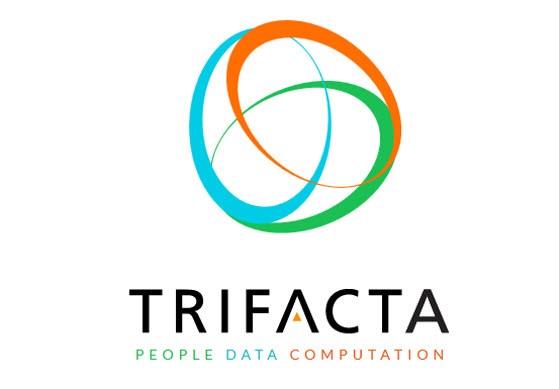 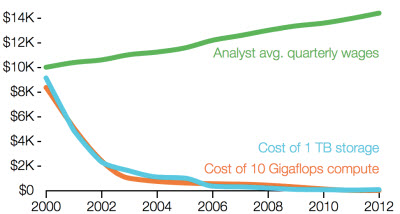 The idea is that data can become more useful when it is delivered in an easily understood form, such as visually. The company was started by computer scientists from the University of California, Berkeley and Stanford University. Their research focuses on radically improving human productivity in data analysis, said Joe Hellerstein, the chief executive of Trifacta and a computer science professor at Berkeley.

“There is a lot of talk about engines and algorithms for unlocking value in data. But real value comes from the people who drive the analysis,” Hellerstein said in an interview with VentureBeat. “The question is how you get data into the form where people can get some value out of it.”

Moore’s Law is driving a huge explosion in computing capacity. (Moore’s Law was first observed by Intel Chairman Emeritus Gordon Moore, and it predicts that the number of transistors on a chip will double every two years). Simple economics suggests that processing power and storage costs will decrease exponentially while the cost of human talent continues to grow. Trifacta is focused on making humans more efficient at manipulating data and culling useful analysis out of mountains of numbers.

Trifacta wants to democratize data analysis. One of the problems is that database experts have to become programming gods. They spend more time coding than they do analyzing data, Hellerstein said. On top of that, there just aren’t enough talented data analysts, according to McKinsey & Co.

Trifacta’s team includes Jeffrey Heer, a professor in Stanford’s Human-Computer Interaction research group. He has worked on open source data visualization libraries such as Protovis and D3.js. At Trifacta, he is the chief experience officer.

“Analysts today can get their hands on lots of data, and they have a range of powerful tools for visualization, statistics and business intelligence,” Heer said. “But they often get stuck in the middle, trying to wrangle data into forms that suit their analysis tools. While each year we teach hundreds of students how to do this, the talent gap is in the tens to hundreds of thousands. At Trifacta we are building a scalable solution to making data manipulation approachable and efficient.”

Trifacta’s chief technology officer is Sean Kandel, a former financial analyst whose dissertation at Stanford studied analyst behavior. His work led to the creation of Trifacta.

“The analysts I spoke with lamented that over half of their time was spent wrangling data rather than doing real analysis,” Kandel said. “And they noted that once their data was in shape, insight often followed very quickly.”

Ping Li, a partner at Accel who leads the Big Data Fund, said in an interview with VentureBeat that tech companies usually propose making computers more efficient at managing data. But the efficiency bottleneck, he said, is in people, not computers. That’s why he funded Trifacta, which Li describes as having interdisciplinary experts.

“It’s about marrying messy data with tools that make it useful,” Li said.

So far, the San Francisco company has just three employees. But it will begin scaling up and working on its technology for use in business intelligence and data science. The technology is appropriate for data sizes ranging from small files to huge petabyte big data repositories such as Apache Hadoop. Trifacta is hiring engineers and designers.

“Every day we see customers analyzing messy data from many different data sources in Tableau,” noted Chris Stolte, the chief development officer at Tableau Software. “Trifacta is bringing to the market an exciting new approach for managing and manipulating data for analysis, which will make it even easier to load data into applications like Tableau, and spend more time answering their important questions.”

Mike Olson, the chief executive of Hadoop distributor Cloudera, said,  “At Cloudera, our customers work with some of the biggest data sets on the planet. That data often requires not just great analytics, but also intuitive ways to explore and experiment with data in order to be useful. Trifacta’s team and the work they have done on interaction design, scalable systems and intelligent algorithms are wonderfully  positioned to deliver the power and ease of use required to manipulate data into useful forms.”

As for competition, Hellerstein said, “I don’t see competition today. But it will be interesting to see this space evolve.”