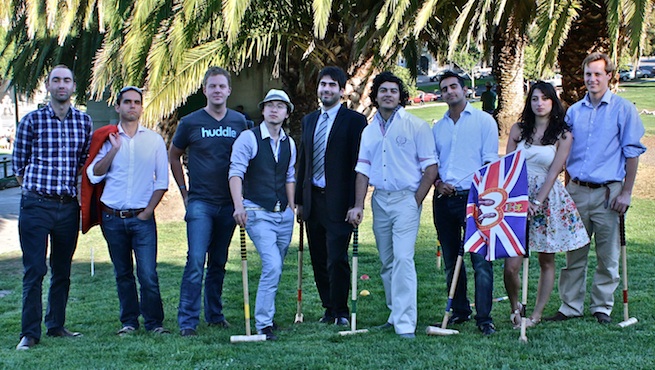 These may be stereotypes, but they’re true enough that for British entrepreneurs in Silicon Valley, it can feel like an oxymoronic existence.

I got nine Oxford- and Cambridge-educated toffs together recently for a round of croquet and some civilized discussion about disruptive innovation. You can read our interview below.

The entrepreneurs I interviewed are pictured above. Left to right:

For my part, stepping off the plane from London two years ago, I was gobsmacked (Brit speak for awestruck) by the gumption (spirited energy) of the twentysomething boffins (nerds) who speak about annihilating large corporations and who sport audaciously patterned socks to business meetings. In Britain, I never heard the term “startup,” and my creative ideas were typically received with a look of distaste from an adult with furrowed brows, as if I’d said something offensive.

Anyone who caught the trailer for Startups: Silicon Valley, the Bravo reality show, will recall the awkward moment when a baby-faced Brit named Ben Way emerges in a posh business suit only to be pooh-poohed by his sister, Hermione. Then he attempts to woo angel investor Dave McClure by acting like he’s the dog’s bollocks (top-quality, excellent) and downplaying his past failures. This strategy might work like a charm in the U.K., but it’s not how we do things in California.

Silicon Valley residents often forget how unique this place is as an entrepreneurial hub — and how challenging it is for people in other countries to start companies. In Britain, children grow up striving for straight-A grades in the hopes of winning a place at a prestigious university like Oxford or Cambridge and a graduate-level trainee position in finance or law. Respect is earned after years of climbing the ladder. It’s not an experience that’s conducive to starting companies.

Still, a few Brits are breaking out of their culture’s traditional expectations and finding success as entrepreneurs, often by relocating to Silicon Valley.

One of the most successful British imports, Kulveer Taggar, sold his first company for $5 million at the age of 24. Taggar was a founding member of what turned into a “mini entrepreneurial crew” at Oxford. He invited British entrepreneurs like EasyJet founder Sir Stelios Haji-Ioannou to speak. They would address about 60 or so students that joined the group, and the students would then split into groups to practice pitching ideas.

On graduation, Taggar first took the traditional route by taking a trainee position at a bank.

“There were people saying at Oxford, ‘Here’s the president of the entrepreneurial society going to Deutsche Bank,'” Taggar said. He lasted about six months before quitting to start a company. “Then those same people said, ‘Look at this guy who’s leaving a plum job. Let’s all laugh at him.”

Silicon Valley has a tiny cohort of British founders, but they have already produced some hot startups, like Peek and Huddle. They are an impressive group. This is no surprise: It takes exceptional talent and drive to pack your bags and move thousands of miles away.

One recent afternoon, we gathered in San Francisco’s Mission District for a conversation about how they mustered the courage to start a company and whether the entrepreneurial ethos can be exported back to Europe.

VentureBeat: Growing up in the U.K., did you find it tough to meet other like-minded entrepreneurs?

John Furneaux: Yeah. Everyone in the U.K. wants to start a company … just like they want a million pounds and a pet dragon. It’s not a reality of life there. I was well-connected in the U.K., and I don’t know a single person who made any money through starting a company or making an equity investment.

Kulveer Taggar: Britain doesn’t have an ecosystem like we do here. There are cultural differences, too; people don’t take risks.

Russell Middleton: Although, we do have a Hacker News meetup in London, and Google and Facebook opened offices there.

Niko Bonatsos: I remember this little area around Cambridge known as “Silicon Fen.” There weren’t real startups there — noone took it seriously.

VentureBeat: Can the culture of Silicon Valley flower in the U.K. and the rest of Europe? What are the challenges?

Furneaux: You have to have a tremendous amount of personal drive and go the extra mile. But it’s much easier here where there is access to venture capital.

Carina Namih: I agree with that. The first thing that jumped out at me is how forthcoming people are here in California. It’s really refreshing when you’re young. You don’t have to toil in a cubicle for 50 years before you earn the right to an opinion.

“Trying to raise angel investment in the U.K. was one of the most miserable experiences of my life.”

Bonatsos: In Europe, if you have a big failure, it will follow you around for the rest of your career. That’s what concerns me.

Immad Akhund: In university, it wasn’t even seen as an option to become an entrepreneur. That will need to change. If I had said, “I’m leaving Cambridge to work on a software project in my room,” someone would have had me committed. Also, I think all the money in the U.K. is still old money. Trying to talk to people from old money backgrounds is strange for me. They don’t get innovation.

Taggar: Trying to raise angel investment in the U.K. was one of the most miserable experiences of my life.

For my first company, we got in touch with one of the big angels in the London scene. This guy went from investing to asking to join he company as a CFO and own a 5 percent share. He convinced us that we needed the gray hair on our team. I believed him, as he was my father’s friend. After a month or two, it dawned on me that we didn’t need a CFO as we weren’t making any revenue, and we had to fire him.

When I moved here, I enrolled in Y-Combinator [an accelerator program that provides seed funding and advice to entrepreneurs]. and it felt like in about 10 minutes, I got the seed money I needed. It’s almost like philanthropy for the angels here. But it is changing in England, and there is a new generation of entrepreneurs — us — who are going to make money and reinvest.

Learn more about taking angel investment, and the pros and cons of raising money from friends and family.

VentureBeat: Without an abundance of mentorship and resources, how did you get started as an entrepreneur?

Richard Price: Silicon Valley is this safe place to make mistakes. In England, once you graduate from university, you have to be serious. There’s rent to pay. But at Oxford, I started a couple companies. My first was a banana bread company called “Richard’s Banana Bakery.” I was obsessed with the idea of selling these cakes to cafes. It didn’t take me long to realize that sandwiches were more lucrative, and I got sick of the physical labor businesses. My next venture was a Facebook app called “PeopleRadar” that was like “Hot or Not.” It was the first viral Facebook app at Oxford.

Taggar: I felt like I didn’t have much of a choice, even if it meant going at it alone. I remember when I was working in my first job in finance — I sat next to this 30-year-old trader wearing handmade shoes — bankers are obsessed with their Church’s [a high-end footwear manufacturer; former Prime Minister Tony Blair is rumored to have worn his lucky pair to every parliamentary session]. I thought, “Oh, my god — that’s me in five years.” I am not going to slog my guts off to wear posh clothes so I can finally live my life at 40.

Namih: But not everyone has that mental dialogue. The guy sitting next to you is probably thinking, “How do I get those shoes? Now back to the spreadsheet.”

VentureBeat: When you announced you were moving to Silicon Valley, did friends think you’d gone round the bend? [Editor’s note: That’s Brit speak for “totally nuts.”]

Tony Lai: Youth is an advantage here as opposed to England, where you’re looked down upon for being young and having bold ideas. On a recent trip to the U.K., I was talking about my ideas and the free-flow of information that happens out here. It seemed very alien to them. People seem protective of their ideas back home. When I talked about my startup, friends in London were definitely looking at me like I’m batshit crazy.

“When I talked about my startup, friends in London were definitely looking at me like I’m batshit crazy.”

Namih: With the recession and rocky job market, people are slowly realizing that they need to look at an industry that is in its ascendency. But when I first left Goldman Sachs to work at a startup in California, I was surprised by how surprised people were by my decision. From their perspective, moving to America is a leap into the abyss.

Lai: University students are the most idealistic — we need to start there. Silicon Valley grew up around Stanford; there are really smart kids at Oxford and Cambridge who would love to cut their teeth on some big-impact project. They need the autonomy to take some risks. England is actually a step ahead in the social-impact space.

Akhund: The big difference for me is the emphasis on doing, rather than sitting around and talking about it. Entrepreneurs in the U.K. would talk a lot about what they were working on. There were few launches, and it was really rare to find a startup with over 10,000 users. Here, startups can get a few million users in a matter of months.

VentureBeat: What are the benefits of starting a company in the U.K. or setting up an office there?

Nathoo: We opened up a U.K. office because my cofounder had visa problems. It’s faster to hire over there. A lot of Brits want to work for Valley companies.

Visa problems can be fatal to early-stage startups. Read one company’s tale of woe.

Price: I think there are untapped resources in the U.K. We hired people from Oxford. They have gone on to do well. There isn’t the same competition for talent.

Nathoo: I was watching the TV show, Prison Break. Someone was being blackmailed for $750,000. My first thought was, why aren’t you asking for more? My understanding of money has changed. A million dollars used to seem like a lot — but here it’s easy money.

Price: Yes, you’re right. The salaries are way higher here than in London, especially for engineers.

VentureBeat: Do you have any advice for entrepreneurs living in the U.K.?

Furneaux: Do your homework. I remember my boss gave me a book about entrepreneurship. A lightbulb went off. It was a mistake because me and five other guys instantly left.

Lai: Spend a week or two out here. You’ll get contacts and knowledge, and it will be invaluable. We’ll be your welcoming committee.

Bonatsos: And if one week isn’t enough to seduce you, go do the Goldman Sachs thing.