As devices become increasingly connected, vulnerability to hacks is a growing concern. Cybersecurity startup SentinelOne announced today a funding round of $70 million to tackle this issue.

Based in Palo Alto, California, the startup has developed antivirus software that’s programmed to be proactive rather than reactive with regard to endpoint security. “Incumbents like Symantec, McAfee, and Trend Micro have not been able to improve their offering or offer any meaningful protection for their customers against evolving threats,” SentinelOne cofounder and chief executive Tomer Weingarten said in an interview with VentureBeat.

He explained that static antiviruses will scan for anomalies that are known and blacklisted. However, once hackers understood this, they began creating variations and alterations that scans would dismiss, as they weren’t on the blacklist. The SentinelOne software is able to prevent an attack using a system that detects intrinsic behaviors by looking at the traits of specific files and processes.

“Ransomware has 50-60 different families out there and a million new variations every day,” said Weingarten. “But if you think about the actual behavior of ransomware across all the families and variants, it’s always pretty much the same.”

And cybersecurity isn’t only a threat to standard targets like government agencies and banks. Jeremiah Grossman, chief of security strategy at SentinelOne, told VentureBeat that ransomware is starting to hold down hospitals and interrupt patient care. “We’re no longer in the area of stealing money anymore,” he said. “Lives are at risk now.”

Grossman has made it his mission to call out vendors on social media who are making “outlandish claims about their security software”: 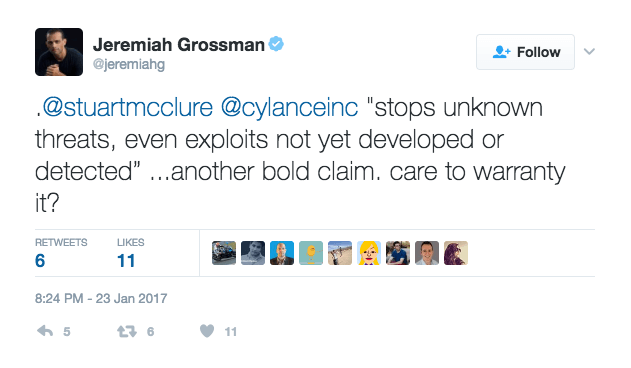 According to him, there are very few vendors that offer a warranty for guaranteed security. This is why Grossman has worked with the team to create a ransomware warranty, whereby customers are guaranteed 99 percent endpoint protection over a given year.

If the software still has a ransomware infection, the startup will pay the ransom, up to $1,000 per endpoint and up to $1 million in total coverage per customer. The startup hasn’t received any claims since it began offering the warranty last summer. “If we can do it, everyone else can do it,” Grossman said. The startup plans to increase its warranty and offer more coverage over time.

In terms of customers, Weingarten didn’t want to go into any details, but he did mention that they are working with a number of governmental agencies. The startup’s roots in the Israeli security and counter-intelligence community certainly adds to its credibility. Many of its developers, who are from the 8200 unit of the Israeli Defense Forces, are currently working at SentinelOne’s research and development (R&D) base in Tel Aviv. One customer the startup was willing to disclose is Time Inc.

The software is supported on Windows, macOS, and Linux, and can be installed on any device (servers, desktops, laptops…). Weingarten wouldn’t talk about pricing information but mentioned that the software is available as an annual subscription.

New investor Redpoint Ventures led this round. Even though the firm has started to invest more heavily in security over the past 3-4 years, Redpoint Ventures partner Tom Dyal told VentureBeat that they don’t have a specific fund dedicated to security.

Unlike the previous rounds that were heavily geared toward R&D, the majority of the new money will go to marketing and global expansion. The startup was founded in 2013 and has around 200 employees.