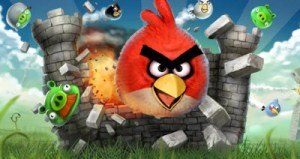 Mobile gamers have become obsessed with small, pudgy and vehemently Angry Birds — mostly playing a game that sends them flying into walls and watching the sparks fly. So much so that Electronic Arts has decided to acquire the game’s publisher, U.K.-based Chillingo, for a reported $20 million.

Chillingo publishes a number of other mobile games, like Cut the Rope and Predators, but none are as popular as Angry Birds. Gamers had already downloaded the paid version of the bird-flinging game more than 7 million times on the iPhone and iPad before it made a move over to Google’s Android operating system.

Demand was so strong for Angry Birds that it nearly brought down GetJar, an Android app marketplace that sold the game exclusively for the first day. GetJar reportedly served up the game more than 1 million times in the first 24 hours it was available for Android phones.

The game is still one of the most popular games on the iPad and iPhone. It ranks second for top paid apps for the iPhone (at $1) and third for the iPad (at $5 for a high-definition version of the app.) Cut the Rope, another one of Chillingo’s published titles, is currently the top app for both the iPad and iPhone — so Chillingo does seem to have some momentum.

Electronic Arts’ mobile division, EA Mobile, already one of the largest publishers on Apple’s App store, acquired the company for an undisclosed sum, according to an email from EA spokesperson Holly Rockwood to VentureBeat. Reuters reported that the deal is worth $20 million plus some additional undisclosed benefits.