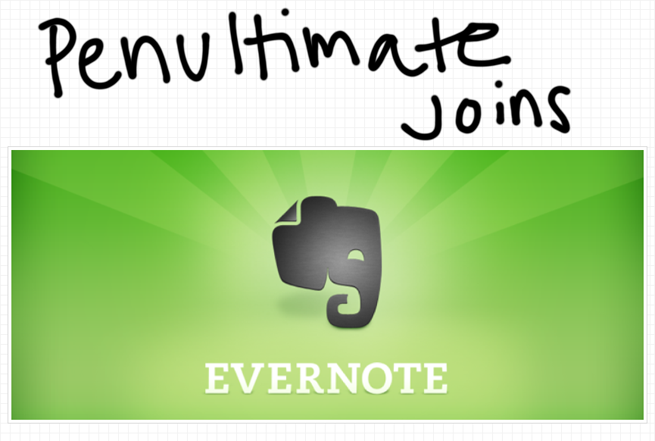 Penultimate was developed not long after the first iPad was released and has become the fourth best-selling iPad app of all time. The app, which costs 99 cents, is meant to resemble a real paper notebook. You can use a stylus or your finger tip to create handwritten notes, drawings, and diagrams using images on the iPad. The first time Evernote chief executive Phil Libin laid his eyes on it, he was impressed.

“Penultimate is an app I’ve been in love with on the iPad for several years. When I saw the app, I thought this is exactly what digital ink should look like for Evernote. I reached out to Ben (Penulitmate’s creator) about two years ago about the product, telling him how much I liked it,” Libin said in an interview with VentureBeat.

As much as Libin admired Penultimate, founder Ben Zotto wasn’t in a hurry to sell his product. However, once Penultimate added Evernote integration in January 2012, it seemed only natural that the two services would blend together.

“Our integration with Evernote was well received and now we are thrilled to have access to Evernote’s handwriting technology,” said Zotto in an interview with VentureBeat.

Evernote has had a lot of money to play with lately, making it easy to grab Penultimate and add Zotto to its team. The company recently raised $70 million at a one billion dollar valuation, and has $166 million in total funding, Evernote IPO chatter has sprung up.

Unsurprisingly, Libin wouldn’t divulge how much money changed hands to acquire Penultimate. He did say that’s its a combination of cash and stock. Zotto, who has pretty much run Penultimate as a one-man show, will join Evernote’s team.

“Penultimate has been a progression from the beginning of the iPad and it’s evolved to something more powerful. Our integration with Evernote was well received and now we are thrilled to have access to Evernote’s handwriting technology,” said Zotto.

For those who love Penultimate, don’t worry — your app isn’t going anywhere for now.

“The app will exist separately, but gain powerful functionality from Evernote,” said Libin. “We will also take the technology and add it to Evernote, doubling down on the existing handwriting technology that our Evernote engineers have been working on [and] to see what else we can do with it, especially on tablets.”

The look and feel of the iOS app will mostly stay the same. It’s important for Evernote to keep the feeling of writing in a real notebook that users have come to love, Libin told me.

Evernote will soon include more handwritten note features, if Zotto and rest of the team have their way. Also be on the look out for a completely revamped Evernote iPad app, Libin says a major redesign is coming soon.