French SaaS startup Station, which is setting out to build a web browser for the workplace, has raised $3.25 million in a seed round of funding led by Accel.

Founded out of Paris in 2017, Station (not to be confused with the mega startup campus Station F that is also located in the French capital) is setting out to create a browser for businesses that gathers all your cloud-based web applications into a single portal. This will not help if you are still using traditional applications such as Office on your desktop, but with the gradual shift to subscription-based software that’s accessed in the browser, well, Station believes it has a solution to boost productivity by sidestepping browser tabs like Chrome and Firefox.

The Y Combinator alum, which officially launched back in October, said it wants to build for SaaS (software-as-a-service) what iOS and Android have built for smartphones, something more akin to an operating system than a browser.

“With more than 12,000 SaaS services on the market, it is clear to us that web browsers aren’t the way of the future,” Station cofounder and CEO Julien Berthomier told VentureBeat. “The same way Apple and Google have built operating systems to host their ecosystem of mobile applications, we are building the operating system for SaaS applications.”

Available for Windows and Mac, the native desktop app lets you connect to more than 400 popular web apps, and the ones you use most frequently are docked down the left-hand side. 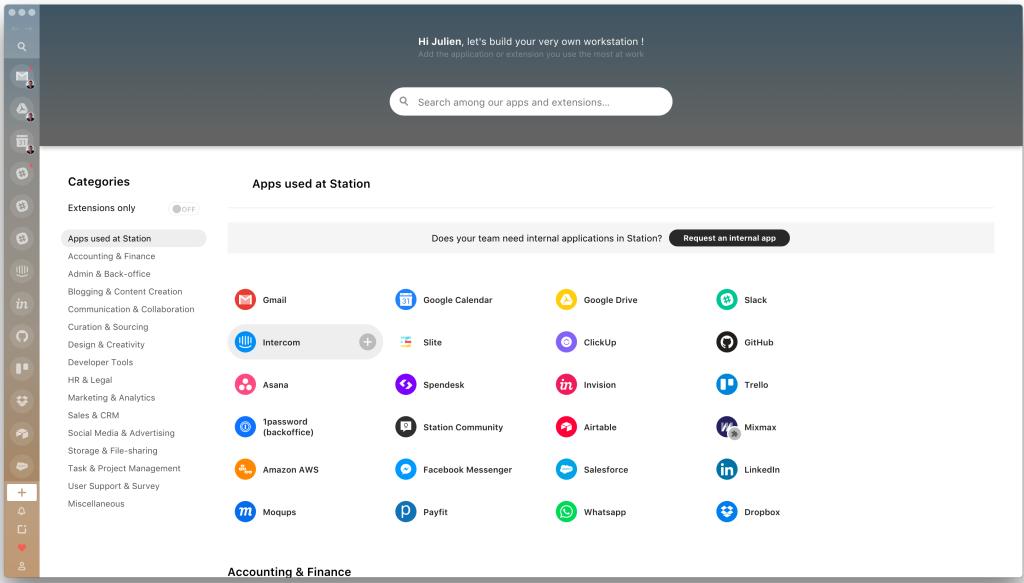 The app includes a universal search function that lets you search across all your connected apps by keyword and allows you to mute all your notifications for up to 24 hours by activating “focus mode.”

One of the main benefits of Station, beyond providing a clearer and less cluttered working environment, is that it helps create a little silo specifically for your work life by separating your personal and business software. This is actually quite important in an age when people often use the same devices for work and home.

“At first, we thought we were just solving an issue that we had personally experienced: the over-accumulation of tabs in our browsers,” added Station cofounder and CTO Alexandre Lachèze. “However, we soon realized that the problem was much more widespread than we could have imagined, and [we] decided to set out to redesign the way people work every day.”

According to Berthomier, Station claims more than 12,000 users, including some at esteemed companies such as Hubspot, Shopify, Spotify, Dropbox, and TransferWise. He said that across the board users spend an average of 4.5 hours each day within Station. Station was also recently voted product of the year on Product Hunt, with nearly 7,000 upvotes from the community, a sign — perhaps — that people really see promise in the company’s offering.

“Our goal is to go beyond your standard web browser and to build a full-fledged operating system for work, allowing employees to be more focused on the one hand and companies to better manage their SaaS stack on the other,” Berthomier said.

With $3.25 million in the bank, Station said it plans to accelerate its product development and grow its user base. Other investors joining Accel include Webb Investment Network, which was founded by former eBay COO Maynard Webb, and Kima Ventures, which was created by French billionaire Xavier Niel.

Station’s participation in the Y Combinator program has also been crucial to building its connections in Silicon Valley, where many of the top SaaS companies are based, while nabbing Accel as a lead investor has lent additional credence. Indeed, Accel has invested in many big names from the online world, including Facebook, and has plowed cash into major SaaS companies such as Dropbox,  Atlassian, Braintree, and Cloudera, which have either been acquired or gone public.

“The network we’ve been able to access in Silicon Valley is vital for us to build partnerships with all the SaaS vendors already in our app store,” continued Berthomier. “Accel, in particular, is an investor in most SaaS companies we aim to integrate with. We couldn’t dream of a better partner.”