The state of Alabama is not exactly booming when it comes to startup activity — it has one of the lowest rates of new business formation in the country, according to the Kauffman Foundation. Additionally, less than five percent of venture funding invested in the Southeast between 2012 and 2017 went to Alabama companies, according to BIP Capital’s State of Startups in the Southeast report.

But Alabama does have some notable activity worth taking a closer look at, concentrated in its largest entrepreneurial center, the Innovation Depot. This collaboration between the public and private sector has generated unique programs that provide the startups that do choose to build their companies in Alabama with a more tight-knit support system than they might get in a more mature startup scene.

A nonprofit organization formerly known as the Entrepreneurial took over the 140,000-square-foot Innovation Depot building in 2006, and opened it as a center for startups in 2007. Converted from an abandoned former Sears, it stretches a full two blocks through downtown Birmingham’s Innovation District, and is the largest tech hub by square feet in the Southeast.

“We were creating this place for young companies to grow, but we were also taking this huge, empty building in the middle of downtown and bringing it back to life,” says Devon Laney, president and CEO of Innovation Depot. Innovation Depot brought him on as COO two years prior to the building’s opening.

Innovation Depot’s multipronged approach got much of the community on board — they raised a total of $15 million from University of Alabama at Birmingham, city and state government, and local corporations to buy and refurbish the building. 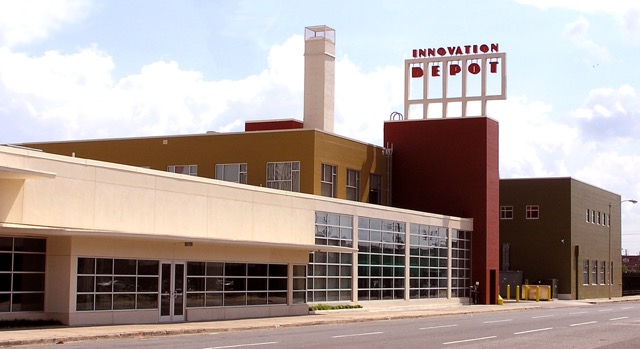 Above: The Innovation Depot in Birmingham, Alabama

Most of those organizations remain involved with the startup center, which houses over 100 member companies and hundreds of students, mentors, and coworkers. In 2017, Innovation Depot-housed companies raised a combined $57.7 million in funding. Innovation Depot’s annual economic impact report claims that its companies had an economic impact of $1.66 billion over a five-year period and created over 1,000 new jobs.

On the workforce development front, Innovation Depot has obtained grants and donations to host technical bootcamps. The first, Depot U, was the first coding bootcamp in Alabama when it launched in 2015. Workforce development is also a key pillar for the new Innovate Birmingham network, a collaborative working group of partners from the public and private sphere, including Innovation Depot, Birmingham Business Alliance, and the University of Alabama at Birmingham.

Most recently, the city drew attention from Apple (Tim Cook is from Birmingham and has visited the Depot) and received money to hold free “Birmingham Can Code” workshops for middle school and high school students.

On the corporate front, along with monetary contributions, a Keep It Local pledge encourages the c-suites of Birmingham’s big companies to “consider local technology suppliers as a resource when possible,” and for those local suppliers to commit “to understand buyer needs and find ways to grow their capabilities to match those needs.” In other words, for startups and corporations to help each other understand the other’s needs.

That left the last challenge to be tackled: seed capital, and a method to deploy it. Laney explored several different models but eventually settled on a simple one: raising a seed fund.

The initial $3 million fund is set aside in a dedicated vehicle for Innovation Depot’s accelerator program, Velocity, founded in 2016. So far, two cohorts have gone through the three-month program. The startup have ranged from companies homegrown in Alabama to those that travel from the West Coast.

What’s unique about Velocity is its funding methodology — all companies initially receive $50,000 for 6 percent equity, a traditional accelerator arrangement. But then, following the completion of the program, any of the startups are eligible for follow-on funding in the form of a non-dilutive grant. Velocity has provided such follow-on funding for eight companies thus far, says Laney. 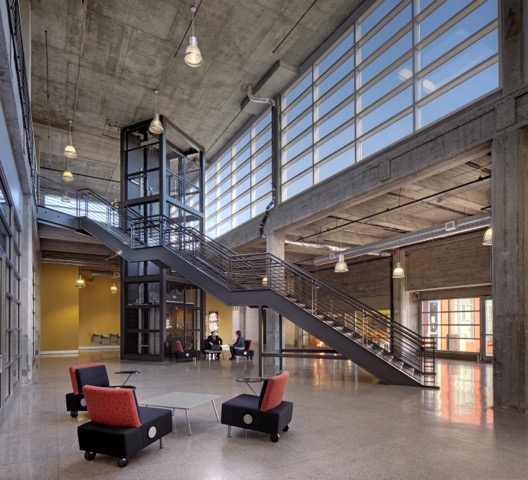 Above: The interior of the Innovation Depot.

The cofounders of a recent graduate of the program, networking app Mixtroz, moved from Nashville (a significantly bigger startup scene in terms of number of companies and investment capital deployed) to Birmingham. Cofounder Ashlee Ammons attributes the move to the support local leaders provided.

“It took us, in Nashville, a year and a half to make the same progress we made here in Birmingham in 13 weeks,” Ammons said in a panel during Birmingham Innovation Week in June. Those relationships even connected the entrepreneur to Apple executives for a meeting when the tech giant visited the city.

This robust support for startups is critical in Birmingham, the largest city in a state that still sees relatively high unemployment, low wages, and a high poverty rate. Throughout Innovation Week, leaders emphasized the importance of growing the tech scene to changing those statistics.

One example that demonstrated a growth company’s potential impact was the landmark sale in 2017 of Birmingham-based grocery delivery service Shipt to Target for just over half a billion dollars. The four-year-old company, which employed 270 at the time of the acquisition, took Innovation Week as the opportunity to announce a $10 million investment in creating 800 additional Birmingham-based jobs.

Public officials including Governor Kay Ivey and Birmingham Mayor Randall Woodfin, who has been an ardent supporter of the tech sector, joined Shipt founder Bill Smith for the announcement. Secretary of the Alabama Department of Commerce Greg Canfield called Shipt a “signpost project” for the state’s innovation economy.

Of course, the challenges Birmingham’s startup scene faces haven’t all been solved — there are still many less tech startups per capita than even second-tier tech cities like Atlanta and Portland. Unlike many smaller markets, Laney says, slower growth comes not from a lack of capital, but from a dearth of knowledge about entrepreneurship overall.

“I think everyone’s on this hot topic of putting the onus on the investors. The investors are here … you have to learn how to sell as the entrepreneur,” Cavale, who recently raised a little over $1 million from local angel investors for his new startup INFLCR, says.

“We need more real startups, meaning young technology companies that have big total addressable market opportunities and can raise funding off of a recurring revenue business,” he says. Still, because of all the positive momentum on the public support front, Cavale remains “cautiously optimistic about Birmingham.”

The real takeaway from analyzing Birmingham’s innovation sector and its many players is that there truly is no formula. While many emerging tech markets say they need capital, corporate connections, or an academic anchor, Birmingham seems to already have these pillars. However, collaborative organizations like Innovation Depot and Innovate Birmingham must continue to work with the community to address new challenges that will continue to plague entrepreneurs and startups.