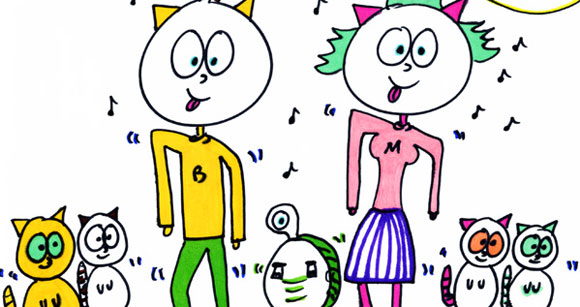 Of all the craziest things for Mark Cuban to invest in, a one-man startup consisting of a horrible dancer who sits at his kitchen table drawing kindergarten-style pictures of cats must be at the top of the list. But Cuban obviously knows what he’s doing: he’s already made most of his investment back. 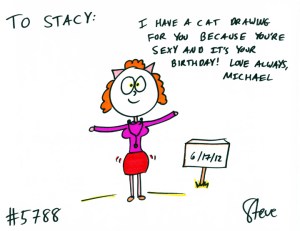 Those who watch ABC’s reality-TV-meets-venture-capital show “Shark Tank” might be familiar with the story of the cat doodler. Steve Gadlin is a web developer in Chicago who wanted to create a business … and also draw pictures of cats. So, naturally, he put the two together.

The result was the site I Want to Draw a Cat For You.

“I wanted to create an experiment where I could do all the things people who create businesses do, and do it with just a widget,” Gadlin told VentureBeat. Initially, in early 2011, the site consisted of exactly two things: an embedded YouTube video, and a PayPal button. Clients watched the video, ordered a cat drawing, and paid $1o. Then Gadlin drew it on paper and snail-mailed it to each customer. Just about the very definition of small-time.

Fast forward to today, however, and he’s sold over 7,000 drawings and has a 4 to 6 week order backlog. Not to mention a $25,000 investment from billionaire dot-com entrepreneur and Dallas Mavericks owner Mark Cuban.

How did this happen? It all started with a video.

A lesson in how to go viral

Quirky, funny, offbeat, with a deceptively catchy jingle, Gadlin’s video has the perfect recipe for going viral. While the video now has over 155,000 views, initially it didn’t get much traction. Then Gadlin had an idea.

“I approached Groupon, kind of as a joke. But, I got a reply a few days later, maybe because they have a big cat mascot.” Gadlin got one Groupon staffer intrigued with the concept: one custom cat picture drawn to order for $3, a steal of a deal compared to his regular $10 fee. It took two months for that one lonely believer to convince enough Groupon staffers that the wacky deal fit the irreverent, unconventional Groupon brand.

And when Groupon finally did decide to offer a cat-drawing deal in mid-2011, it launched only in Santa Cruz, California, as a side-deal. In other words, Groupon released it in a small market, did not email it out to daily deal subscribers, and hid it away on the sidebar as an “also available” deal.

Then the internet happened. 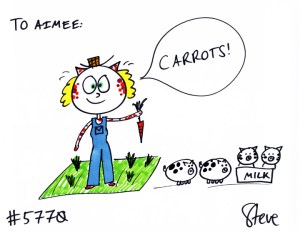 Reditt and Fark.com picked it up. The original ceiling on the Groupon deal was 500 drawings, but the uptake was so good Gadlin increased the cap to 1000. As he tells it, “the margins were terrible, because we had discounted it so heavily for Groupon,” but that was the point at which he began to build all the tools that an actual business would need, such as a fulfillment system.

Admittedly, Gadlin’s initial business systems were still “kinda lemonade-stand scale,” but thanks mainly to the fact that hundreds who purchased the deal didn’t actually order a drawing, Gadlin was able to survive the onslaught. And keep dreaming.

That dream led him to the “Shark Tank.”

The leap from online to network TV

The ABC show Shark Tank, now in its fourth season, consists of a panel of executives and investors (the sharks) who review rapid-fire business proposals from aspiring entrepreneurs. Sharks include real estate exec Barbara Corcoran, tech entrepreneur Kevin O’Leary, fashion magnate Daymond John, and of course Mark Cuban, who sold Broadcast.com to Yahoo just before the dot-com crash. He then went on to buy the Dallas Mavericks basketball team.

On the show, the sharks typically pummel the hopeful contestants with tough questions, and it’s not unknown for entrepreneurs to leave in tears. VentureBeat asked Mark Cuban if the sharks are really as harsh as they sound on camera. In his words, “Worse. They cut out most of the nasty stuff.” But in late 2011 Gadlin decided to apply.

“I was familiar with the show … I’m kind of a serial game show applier,” Gadlin told VentureBeat. “I was almost on ‘Deal or No Deal,’ almost on ‘Who Wants to be a Millionaire.’ But this was the one I never expected to get on.”

Gadlin’s pitch to get on the show was “a two-sentence email consisting of ‘I draw stick-figure pictures of cats and sell them for ten bucks apiece … let me at ’em.'” The typically Gadlin-esque low pressure, almost lackadaisical approach worked: a few months later he was invited out to LA to present his business to the panel of sharks on camera.

The final rehearsal was a disaster — it was nerve-wracking and, in Gadlin’s own words, he choked. Stung by the experience, he spent the next 24 hours solid practicing. 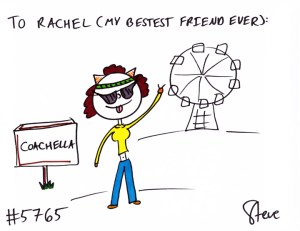 “By the time I pitched to them, I was so focused that there were no nerves.” He danced, he sang, he pitched, and he endured a fairly significant degree of ridicule from sharks who didn’t get his vision or his passion. (Watch the episode here.)

To celebrate — although this was left on the cutting room floor — all the sharks got down on the presentation floor with Gadlin and danced a conga to his I Want to Draw a Cat For You song. I’m guessing that never happens at Kleiner Perkins.

“I walked out of there feeling like I won the lottery,” says Gadlin.

Cuban also offered to draw a few cats, although he does charge a little more than Gadlin: $1000 per picture. The offer is only available by special request and is not featured online, but so far two people have become proud owners of a signed Mark Cuban original, with a third on the way.

Surprised that a billionaire businessman finds the time to scratch out a cat picture, even at the very acceptable rate of $1000? When VentureBeat asked Cuban where he found the time, he credited not taking meetings or phone calls.

“I don’t do phone calls or meetings. It’s all emails. So it makes it easier.”

Seed money is only the first step 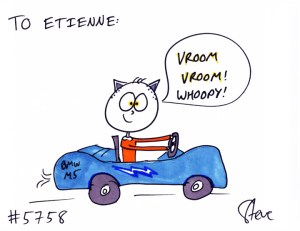 For Gadlin, coming back home was coming back to reality, his wife and three kids, and a job as a web developer for a Chicago TV station. He’s kept the day job, and kept his feet on the ground.

“Mark provided some seed money, but aside from the attention and notoriety, there’s still a lot of work to be done.”

Part of the work is brand extension. Seven thousand cats later, Gadlin is fully aware that he cannot always be the one to draw all the felines. But currently, as multiple copycat sites (!) are cropping up with artists who want to sketch an elephant or dog for you, it is still important to him to personally draw each picture.

“These sites with dogs and elephants … that’s not the brand. The brand is this head-scratching experience when you become a customer that I’m trying to extend to other products.”

Gadlin must be succeeding, because lead (and only) investor Mark Cuban is happy so far, telling VentureBeat that he is “thrilled. I’ve already gotten most of my investment back.” And when asked why he would invest in I Want to Draw a Cat For You, Cuban has a great answer:

“It was an acquihire. Steve is smart, creative, technical and weird. Just the type of person I would love to hire for the 25k I invested in the company.”

Currently, Gadlin is expanding to other products, including custom pins and (of course) t-shirts. The Cat Drawing Club is another, which allows Gadlin to draw one picture for multiple people, instead of just one at a time.  And he’s also working on upsells: color will run you an extra $5, as will shipping in a protected flat container. The cat drawing guide and the cat coffee table book cannot be far behind.

Gadlin understand the risks that instant internet stardom can bring: the one hit wonder that no-one ever hears from again. “If I don’t handle the brand properly, it could fade away so fast,” he told VentureBeat. The new products are his effort to make the current 15 minutes of fame last.

And he maintains a very level-headed approach to it all.

“I can’t just say I decided to go on Shark Tank – how brilliant of me. It was one of several opportunities – same thing with Groupon – that I decided to take a chance on it and got very lucky that I met the right person at the right time and was able to progress. I wanted to find nontraditional ways to market and grow something that by no rights should it grow.”

Here’s the cat the Gadlin drew for VentureBeat. We’re skinny and fast, because we’re about startups, and apparently taller than Mark Cuban, who is, of course, smoking a cuban: 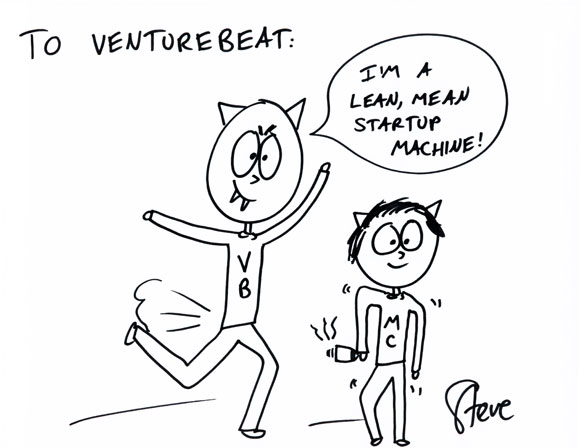 Perhaps the sketch is, in some way, autobiographical. Steve Gadlin is a pretty lean, mean, startup machine too.

I received an email from the Groupon staffer who fought to approve the deal. Here’s her message:

I just want to say that I am very glad that I Want to Draw a Cat for You is doing so well.

I was the market planner for Groupon Northern California at the time and had to battle my managers for permission to run the cat-drawing deal (the sales rep who closed the deal also believed in the deal but it was just kind of sitting in the pipeline for months). I knew the deal was gold the moment I saw it in the pipeline and I couldn’t believe that none of my colleagues ran the deal or were planning to (most likely because 1. They didn’t get “it” 2. At a $5 price point, it wouldn’t have made them any money).
The deal actually ran in Santa Cruz as a side deal (not Santa Rosa) and if I could have made it a main deal I would have, but I was given orders to run it as a side deal only.
I just wanted to clarify!
Have a great weekend!
Robyn Chang

Thanks for the update, Robyn!