Indiegogo made its name as a crowdfunding site where startups could get cash for their big dreams. But the San Francisco company is moving beyond that idea to helping startups with design for manufacturing and hardware distribution.

In ten years, Indiegogo has raised $1.3 billion for 800,000 entrepreneurs. That has given the company a lot of insights. Indiegogo CEO David Mandelbrot said the company started taking advantage of its relationships with hardware distributors and designers a couple of years ago, as it found that was where entrepreneurs were running into trouble. Indiegogo has relationships with hardware distributors such as Arrow Electronics and Ingram Micro.

I met with Mandelbrot at CES 2018, the big tech trade show in Las Vegas last week. The company’s booth was in Eureka Park in the Sands Expo, where there were 800 startups showing off their wares. We talked about a variety of topics including equity crowdfunding and enterprise crowdfunding. 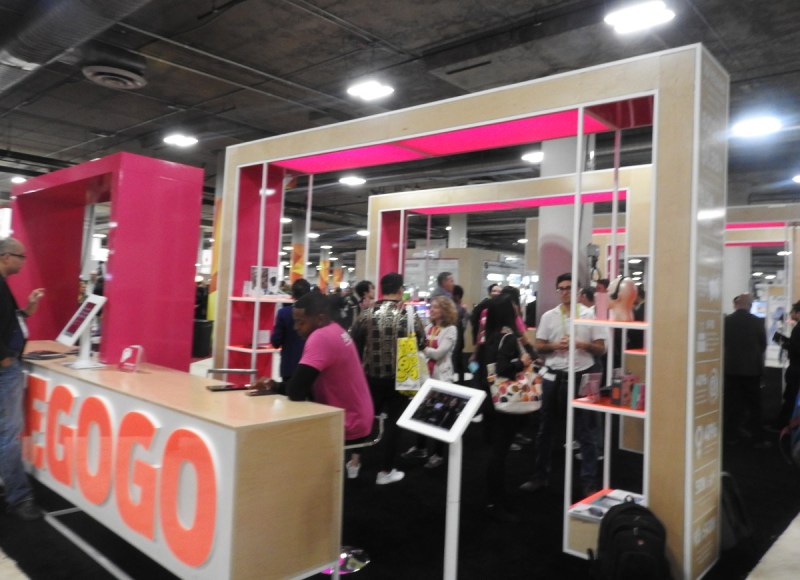 Above: Indiegogo booth at Eureka Park at CES 2018.

VB: What are you guys showing here?

David Mandelbrot: Mostly we’re talking about our partnerships with Arrow and Ingram Micro to help entrepreneurs, after they’ve raised their money, to be able to manufacture and ship their products. We’re talking a lot about our marketplace, where we now have a place on Indiegogo where entrepreneurs that have raised money and have manufactured their product can sell their product and reach our audience of 10 million people on a monthly basis. We’re also talking about equity crowdfunding, which is enabling entrepreneurs to use Indiegogo as a platform to raise investment dollars.

VB: I remember Atari saying that was one of the attractions of working with you guys, the distribution and the hardware side. Is that becoming a common sentiment from the folks you’re working with?

Mandelbrot: Yeah, more and more entrepreneurs are taking advantage of the relationships in hardware to help them get their concepts to market. I was just meeting with Square Off. They make what I call the Harry Potter chess board, where you make your moves and then it moves the pieces automatically on the other side. They talked to Arrow to help them with their manufacturing, and that was one of the big attractions for them.

VB: How long ago did you start thinking about this sort of expansion?

Mandelbrot: A little over two years ago. We started out by entering into our relationship with Arrow Electronics about a year and a half ago. It was because we were working with so many entrepreneurs that were doing really well at raising money on our platform, but they struggled to get their products manufactured. We saw an opportunity to help them. At the same time, companies like Arrow and Ingram Micro are eager to connect with early stage entrepreneurs.

VB: Is there something tangible you’re seeing at this point?

Mandelbrot: The main thing is we’re seeing more products get manufactured and shipped. This year at the show there are hundreds of products that were funded on Indiegogo. Now these companies have their own booths here and they’re demoing products. Not only are these products getting manufactured, too, but they’re getting retail distribution. I just met with Mifold. They’re about to get carried in 1,800 Target stores. Other products are starting to show up on retail shelves. Zeus is another one getting wide distribution. They make a device to connect your car.

VB: It seems like a good insight, to realize that crowdfunding isn’t the only stage that matters.

Mandelbrot: Absolutely. There’s more to it. In some ways crowdfunding is kind of a misnomer. The other trend we’re seeing is more and more companies using Indiegogo as a way to engage with their audience early. In the last year we’ve had campaigns from companies like Procter and Gamble, Honeywell, and Bose. They’re big, public companies. They don’t need to raise funds. But they’re using Indiegogo to validate the products coming out of their innovation divisions and launch those products to an audience they can engage with directly.

VB: Do you see the show as a good funnel for you guys? Are you finding more entrepreneurs this way?

Mandelbrot: Absolutely. One of the reasons we’re here at CES, and particularly here in Eureka Park, is to better connect with entrepreneurs. This is the section of Indiegogo that’s just for early stage companies. Samsung doesn’t have a booth here. We not only engage with companies that have been on Indiegogo and figure out new ways to work with those companies through our marketplace, but then we also engage with new companies that we may not have come into contact with before, who recognize the variety of ways Indiegogo can help their business.

VB: How big are you guys as far as employees now?

Mandelbrot: Indiegogo is at about 140 employees. We have offices in San Francisco, New York, and Los Angeles. We also have people we work closely with in Europe and Asia. Another trend we’ve seen with Indiegogo is more and more entrepreneurs in China that are using Indiegogo as a way to connect with new audiences of U.S. consumers for their products. 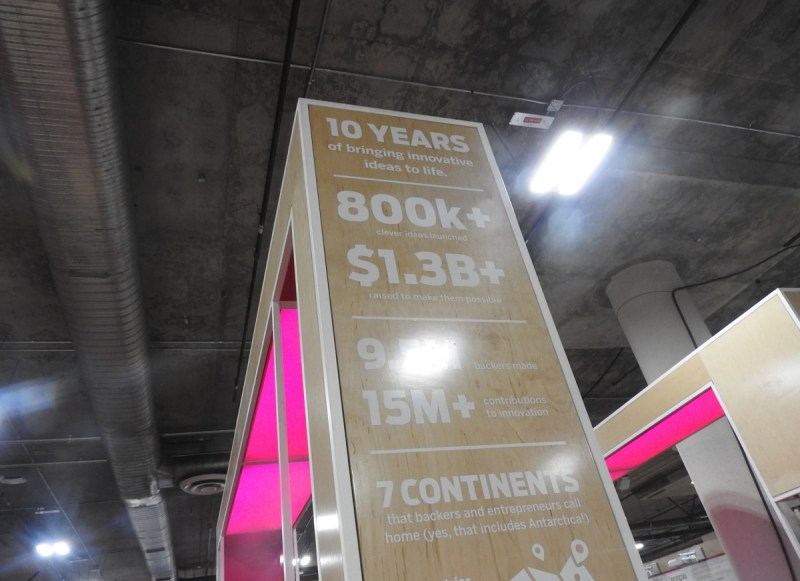 Above: Indiegogo’s track record over 10 years.

VB: It seems like you’re getting pretty good data out of this.

What’s really interesting about one of these metrics is that 40 percent of transactions are cross-border. We’re connecting more and more people from other countries around the world, entrepreneurs from other countries that need a platform to engage with customers or backers globally.

VB: What are some predictions you might make about where this is going?

Mandelbrot: It’s easy to predict growth in the areas where we’re seeing the greatest traction. One is in equity crowdfunding. We’re seeing substantial growth in backers who want to have a financial interest in a company, rather than just a perk. Just here at the show in the months leading up to it, we’ve been getting much more inbound interest from companies that want to use Indiegogo as a platform for raising money. It might be a more straightforward solution for them than raising money from VCs or through other mechanisms.

Enterprise is another area I would forecast really big growth — not just for us, but a change in how enterprises engage with their customers. Rather than selling through distributors or retail where you don’t get to connect directly with your customer, another big trend we’re seeing is enterprises that are using Indiegogo as a way to engage directly, learn more about what’s working and not working with their products, upselling those customers, validating products in their pipeline that they haven’t put into production yet. Based on the activity we’re seeing at the show, I expect substantial growth in that area. 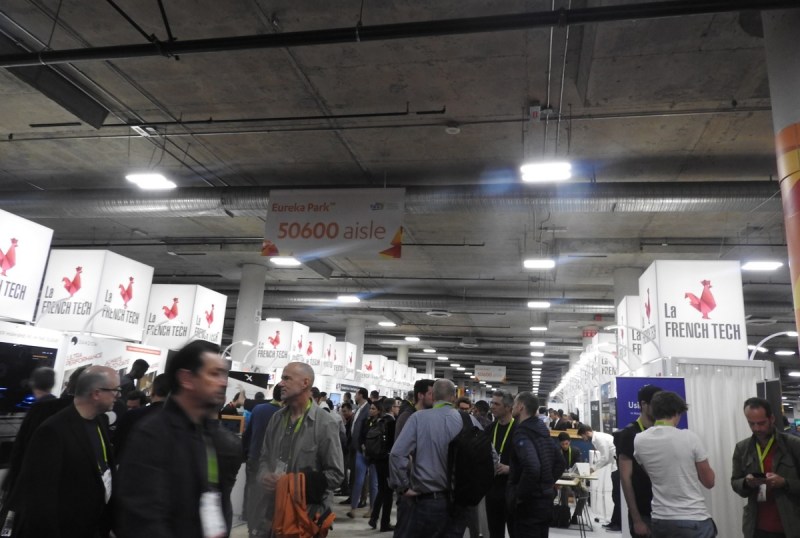 Above: Eureka Park at the Sands Expo at CES 2018. The area had more than 800 startups, including many from France.

VB: Is there any observable cryptocurrency effect on your business? It seems like that’s where all the dumb money is going, into ICOs.

Mandelbrot: It’s interesting. I don’t know. There was a time, in the first internet bubble—it seemed like there wasn’t a lot of smart money that was moving into the internet. But it was just a platform that took some time to develop and enable substantial business to be built on top of it. I feel the same way about blockchain. It’s very early, but it’s logical that it could be a useful platform for all types of transactions and commerce.

We’re starting to put our toe in the water. We just had our first ICO on Indiegogo, a presale for tokens to use in a real-world fantasy football league. We saw a lot of experienced investors and inexperienced investors alike participating in that ICO. It was very successful for the entrepreneurs and worthwhile for the backers to participate that way.

VB: And these startups can eventually set up payment systems through blockchain.

Mandelbrot: Right. I do think it’ll happen. We’re very early, but it makes sense because of the unique ways you can use the blockchain. It can be a smarter platform than a traditional commerce platform, where it’s just money flowing from one person to another. There can be rules about how those funds flow. It can potentially be a very robust platform for commerce and marketplace-type transactions.