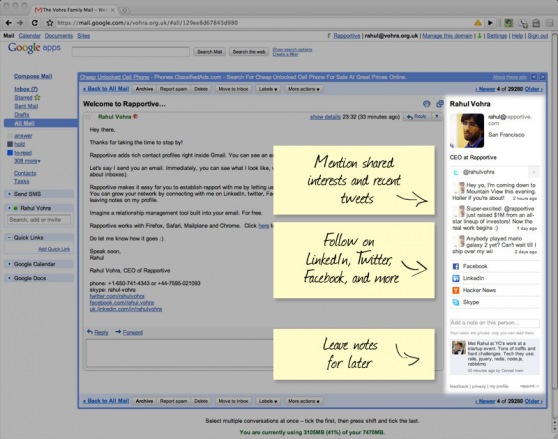 Earlier in February, news broke that social network LinkedIn was buying Rapportive, a company that makes a Gmail add-on for contacts. On Wednesday Rapportive made it official and announced the news on its company blog.

No word yet on the purchase price, but rumors were flying that LinkedIn would be paying over $10 million for Rapportive. Also no word on what, if anything, will change with Rapportive, but the service’s existing popularity will probably help it stay intact. VentureBeat reached out to Rapportive’s chief executive Rahul Vohra, but he wouldn’t give any more details.

Rapportive is a plug-in that works with Google’s Gmail People Widget, a sidebar next to each opened email that displays contact information on the sender if available. The plug-in that adds shared content, tweets, social media buttons, and notes to your Google Contacts.