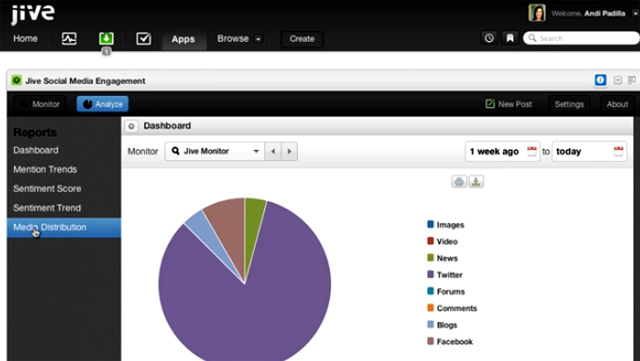 Enterprise social networking company Jive Software priced shares of its initial public offering at $12 a share and sold them to raise $161.3 million on Monday. Trading begins tomorrow for the company’s stock on the Nasdaq exchange under the symbol JIVE.

Palo Alto-based Jive filed to go public back in late August, with a stated intention of raising up to $100 million. But the offering will be higher than its original plan with an offering of $160.8 million, with a market cap of around $700 million. The company sold 13.4 million shares, which is up for the plan to sell 11.7 million shares.

The company competes with other enterprise social networking products like Yammer and Salesforce’s Chatter. Jive gives enterprises social networks that work function similarly to Facebook and Twitter. Employees create a profile with their information and then have the ability to post content, comment on others’ statuses and share files seamlessly. Other third-party apps also work with the service, including Box and SlideRocket.

Before it filed to go public, Jive raised $57.5 million total. The company’s most recent round of funding came July 2010, when it raised $30 million from Kleiner Perkins Caufield & Byers and Sequoia Capital. Sequoia owns 36.2 percent while Kleiner Perkins owns 14.2 percent.

Jive’s IPO will be joined later in the week by Zynga’s much bigger one. Zynga plans to raise up to $1.15 billion with its IPO on Friday.

A video outlining Jive Software’s apps can be viewed below: