Anti-virus software pioneer John McAfee is wanted by authorities in Belize only for questioning on how his neighbor ended up dead with a 9mm round to the back of his head in 2012. But not for murder.

“We’d like him to come back here and answer questions about Gregory Faull, but no, we don’t have enough to arrest him,” a special branch officer with the National Police in Belize told me during a brief interview recently in that Central American country. A second National Police officer in the town of Hopkins told me the same thing.

In other words, there is no arrest warrant for McAfee, who now lives in Portland, Oregon after bailing Belize in a hurry in 2012 after authorities sought to question him in the shooting death of Faull, a former neighbor of his who McAfee suspected of poisoning his dogs. Faull was later found gunned down, and McAfee quickly emerged as a suspect. 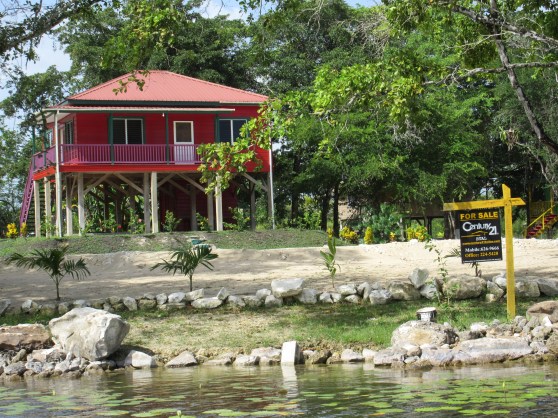 Above: John McAfee’s house in the Orange Walk district of Belize. It’s on the market for $500,000.

In short order, McAfee fled to Guatemala with a Vice editor in tow while wearing a disguise, was captured by the military there, faked a heart attack, and was eventually deported back to the United States. Many media outlets fixated on the case of McAfee, who sold his anti-virus company for around $100 million years ago.

The presence of McAfee is still felt acutely in this small Caribbean country with a population of just 250,000 people. Until 2012, McAfee had lived here, owning multiple properties, both on Caye Culker and inland, in the Orange Walk district, in the north of the country, said Amir Reyes, a tour guide who was friends with some of McAfee’s Belizean employees who he said are still on the payroll.

Word on the street in the villages and towns of Belize is that McAfee wasn’t actually the triggerman. Sources told VentureBeat it is believed one of the men he employed as muscle gunned down Faull.

Since fleeing, McAfee has enraged the current prime minister of Belize, Dean Barrow, calling him a shakedown artist who tried to extort $3 million from him. The tweets and blog posts spewing invective against Barrow have created a huge firestorm of anger among the Belizean people and politicians. McAfee has steadfastly denied killing Faull.

And now McAfee is back in the limelight, showing up to Defcon in Las Vegas in August to announce his return to the technology fold with a new startup that has nothing to do with security. He has also taken to the ether to come out in full support of net neutrality, and in the process, the tech renegade launched harsh broadsides against Comcast, Verizon, and AT&T last week.

“They’ve been screwing us for years,” McAfee tweeted recently.

There are many who agree. Grass-roots organizations and concerned citizens have sent about three million “public comments” to the Federal Communications Commission on the hot-button issue. Some want the FCC to start regulating ISPs just like the mighty telcos, which routinely offer subpar service. Advocates for net neutrality argue that this move would hurt startups and small business. AT&T, meanwhile, has proposed that consumers should have more say in how the Internet’s so-called “fast lanes” are controlled.

At Defcon on August 8, a tan and combative McAfee took the stage to unveil his new startup before a packed conference room with about 700 in attendance. It was there he announced his new startup, called the Brownlist. McAfee, flanked by heavy security, said he was launching the BrownList to help the so-called “little guy.”

For example, the Brownlist will actively solicit complaints by the everyman (and woman) who feel they are victims of an evil local or national government, or a large corporation. After the complaints are filed, Brownlist staffers will help its users get justice. McAfee said that after the complaint is reviewed, he will give the above-mentioned entities 24 hours to respond.

“Turn your anger into something positive,” McAfee declared at Defcon.

To be sure, the Brownlist bears little comparison to the anti-virus software company named after McAfee. Though he sold it for just $100 million in 1994, the company was later bought by Intel for over $7 billion in 2010. It has since been rebranded as Intel Security in an obvious bid to distance itself from the colorful founder.

These days, McAfee is living in Portland, Oregon and is married to a woman he met in Belize. McAfee has so far declined to respond to my requests for an interview. But I’m confident that McAfee and I will soon have coffee. Stay tuned.