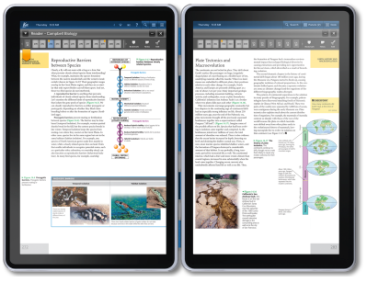 Kno, the maker of an upcoming digital textbook tablet, announced today it has secured $46 million as part of an equity and debt round. Marc Andreesen’s Andreesen-Horowitz was the lead in the round, with Silicon Valley Bank and TriplePoint Capital participating.

The company is building an all-in-one tablet for the higher education market that combines digital textbooks, course materials, e-mail, and the web into a dual-screen, notebook-shaped device.

Although the price of the device is not yet confirmed, CEO Osman Rashid estimates that it is likely to be under $1,000.

The advent of a “digital” textbook in schools and colleges is something that’s been talked about since the early days of the computer, although it has never had a chance to crystallize. But now, with devices like the iPad breaking new ground and technology finally catching up to the dream, it’s an exciting time to be a student.

The challenge for Kno will be in making its education-focused device comparable to a general-purpose option like the iPad, or for that matter, its many upcoming competitors. Students are unlikely to carry two tablet devices, so the tablet needs to either replace enough features of devices the iPad to merit its replacement, or offer a particular use-case, like the Kindle has achieved with its E Ink-based reading experience, to earn its extra space in the backpack.

So far, options for college students looking to replace their eight pound textbooks on the iPad have been emerging, but limited. A company called Inkling offers an iPad app for interactive textbooks customized specifically for the form factor, while CourseSmart, already established as a popular eTextbook-retailer, has bought out an iPad app to bring its catalog to the device.

Through personal experience as a college student, however, I’ve found their current catalogs to be too limited or prices unreasonably high to justify throwing away the eight pounders — as ideal as that would be. Time and competition, hopefully, will be instrumental in fixing both as more textbooks are available for cheaper prices (at the very least, cheaper than their hardbound alternatives).

With competition both on the device and textbook front, Kno clearly has its work set out for itself, but it seems to be making promising headway.

The company has announced partnerships with publishers like Cengage Learning, McGraw Hill, Pearson and Wiley, and will be launching a student beta program in fall with a number of universities and colleges across the US. It hopes to use its new-found capital to assist it in bringing the tablet into market by the end of this year.

Kno is based in Santa Clara, California. With its previous two rounds last year, it has raised $55 million to date. The company is led by Osman Rashid, who previously co-founded Chegg, a startup in a similar space offering textbook rentals.