National Grid Partners, the venture capital arm of a big utility provider in the northeastern U.S., has raised $150 million in fresh capital to invest in startups at the intersection of energy and information technology.

The funding comes a couple of years after the Los Gatos, California-based investment division raised $250 million to try to disrupt the energy business. Of that amount, National Grid Partners has invested more than $227 million into 29 startups in about 30 months.

Now the utility industry’s first Silicon Valley-based corporate venture and innovation group will invest even more money in the cause of energy transition amid greater overall investment activity. Just last week, Energy Transition Ventures raised $75 million to invest in getting the U.S. energy industry to move to renewable energy.

She noted that this week — which is Earth Week — National Grid is kicking off its sponsorship of the United Nations’ COP26 climate conference. COP26 is the biggest assembly of global environmental policy and industry leaders since the 2015 Paris Agreement.

As part of its COP26 activities in the United Kingdom this fall, NGP plans to hold its first annual summit of the Next Grid Alliance. This consortium of more than 60 worldwide utility companies provides senior-level executives a platform to share industry best practices and solve some of the biggest challenges facing the energy sector.

I asked NGP how it measures the success of its investments, and Lambert responded via email.

“We measure ourselves on both strategic success and financial success,” she said. “Almost 78% of our portfolio companies are strategic — which means they have a proof-of-concept, pilot, or deployment with National Grid’s business units. These are technologies that are helping keep our networks more secure and reliable for customers, helping National Grid become more efficient and cost-effective, and helping onboard more clean energy to the grid.”

She added, “On the financial side, we’ve seen significant valuation increases throughout the portfolio. With our exits, Pixeom and Aporeto, we saw an internal rate of return of over 150% for each company. And we expect more exits this year. Our top eight portfolio companies right now are expected to produce minimum combined proceeds of nearly half a billion dollars in the next one to three years. If you think about a venture capital fund’s lifecycle, it typically takes 10 years to return a fund. In another three years, we’ll likely have returned our initial $250 million fund twice over.” 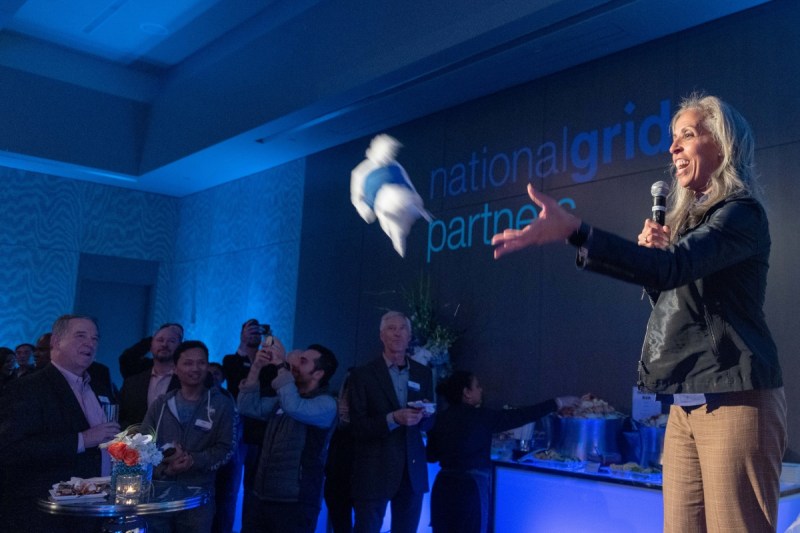 While more than 70% of NGP’s portfolio companies have strategic engagements with National Grid — such as LineVision, which also joined the portfolio this month — seed stage startups like AccuKnox and Pathr reflect NGP’s plan to invest in every stage of the innovation ecosystem, Lambert said.

This stage-agnostic approach includes NGP’s Incubation office in San Francisco and an Innovation team to turn ideas into prototypes that can be deployed in National Grid’s business units or spun out as standalone companies.

NGP has led more than 60% of its startup investment rounds, with two merger and acquisition exits. Lambert spent 19 years at Intel Capital, investing in a variety of software and other kinds of tech companies. She was a leader in the company’s investments in diversity and was directly involved in the creation of a $125 million diversity fund at Intel.

Asked how far along the company is in terms of disrupting the energy industry, Lambert said:

If I were to characterize it with a baseball metaphor, the energy sector is in the early innings. Let’s focus on the “3Ds” of digitization, decentralization, and decarbonization. The industry’s just beginning on its digitization journey. Companies are still dependent on manual processes and paper records, but we’re automating more. Many of our assets now have sensors on them, and we’re learning how to leverage that data to better serve the customer.

With decentralization, the industry as a whole is further along, with many established renewable energy startups and public companies. But there are still challenges in how you onboard these off-grid resources to the traditional baseload with sub-second response. If you lose power, you need to be able to turn on alternative power from renewable sources in an instant, and the industry in general doesn’t do that very well yet.

Decarbonization, or net zero as it’s commonly called, is the most difficult, and it will take some time before we achieve that goal as an industry. NGP is convening a new industry group called the NextGrid Alliance, which includes senior executives from 65 utilities and counting. We’re establishing working groups to address the challenges facing the industry, and the transition to net zero was one of the top three issues NGA members pointed to. I predict the clean energy transition’s going to be led by whoever does the best job with off-grid power because that will ensure reliability and give consumers the most choice.